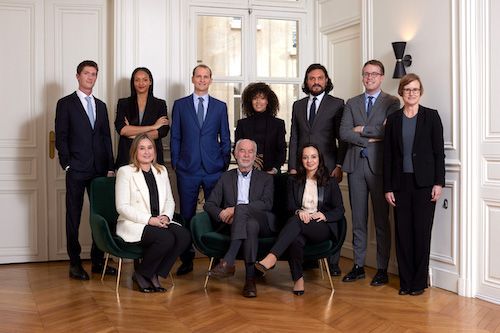 (TRINITY INTERNATIONAL) - Following its success in Africa, the Middle East and other emerging markets, Trinity International, a pioneering law firm which was set up 16 years ago with the aim of becoming a top tier firm for projects and finance transactions in the emerging markets, has now set its sights on becoming a go to firm for international arbitrations in those regions with the successive hires in London and Paris of two very experienced international arbitration practitioners.

Poupak Anjomshoaa who joined from Baker Botts in September to head the disputes and international arbitration practice, is based in London. She is now joined by Natasha Peter from Gide Loyrette Nouel, who is dual-qualified in England and France and will be based in Paris and focusing on the Francophone markets.

The international arbitration practice has been set up to address a growing demand from the firm's clients for the firm to handle their disputes arising from projects and transactions in the regions in which they operate, in view of the firm’s renowned knowledge of operating in those markets and the increasing value clients place on trusted advisors and the need for continuity.

The four-partner disputes team, who have been involved in both commercial and investor-state international arbitrations across the globe, in Africa, the Middle East, Europe, the Far East, North America, South America and the Caribbean, enable Trinity, which is involved in many strategic and first of its kind projects in the renewables, power, energy, oil and gas, mining, construction and infrastructure sectors in the emerging markets, to offer a one-stop shop to its clients.

“This new offering is an important step for Trinity and its clients. The boutique nature of our firm, which allows us to operate more closely and collaboratively, combined with our sector and geographical knowhow, will allow us to operate as one incredibly strong team with a deep knowledge and understanding of our clients and their projects and transactions and all the necessary skills to manage any crisis and pursue claims and defend our clients in any arbitral proceedings.”, comments London based Senior Partner Paul Biggs.

“I have been fortunate enough to work with many great clients operating in Africa in the past 35 years, especially in the mining, oil & gas and infrastructure sectors, and in that time I have developed with Lucien a crisis management and also an arbitration/mediation investment law practice. Lucien and I have continued with that work since we joined Trinity (e.g. on the ICSID arbitration against the State of Mali on which we were co-counsel) but Poupak and Natasha’s arrival, internationally known and highly respected international arbitration experts, together with specialist international arbitration associates in Paris and London, shall make a huge difference for our clients because Trinity now has added bench strength to represent clients in international arbitration and all other forms of Alternative Dispute Resolution.  I also have a particular interest in business and human rights law which is becoming more prevalent in investor-state disputes so the team is well placed to deal those issues which are very important to our clients.”, note Stephane Brabant, Senior Partner.

Poupak Anjomshoaa and Natasha Peter have an in-depth experience of all stages of an arbitration procedure. They also advise clients on jurisdictional issues, the enforcement of arbitral awards and on applications to set aside arbitral awards in both common and civil law jurisdictions.

Thanks to their combined 46 years’ of international arbitration and disputes experience and the diversity of their backgrounds, they approach each case with a deep understanding of the commercial, sectoral and geo-political issues at stake, as well as a strong cultural sensitivity. Poupak Anjomshoaa, who is a construction barrister by training, spent several years as the GC of a Middle Eastern petrochemicals company and has a very strong technical knowledge and grasp of project development and project financing which match perfectly the expectations of the firm’s clients. Natasha Peter, also a barrister and an avocat, has extensive experience of arbitrations in Africa and a deep understanding of financial and technical matters and the energy and renewables sector, which accounts for much of the firm’s projects.

"Joining Trinity to establish the international arbitration practice was an easy decision because the regions and sectors in which the firm operates fit perfectly with my own profile and I have always believed that when a client ends up in dispute with a counterparty, the most natural choice of firm to handle the dispute is the firm which acted on the transaction and has the background knowledge to it so the addition of the international arbitration capability to Trinity’s already very successful platform makes perfect sense.  I am delighted that Natasha has agreed to join me on this journey and we are both very excited to be working with Stephane and Lucien and the rest of the team. Our ambition is to be among the top tier international arbitration practices in the markets in which the firm operates within the next 3 to 5 years" adds Poupak Anjomshoaa.

“I am excited to be joining the partnership of such a dynamic and ambitious firm. Trinity has a reputation for excellence in its existing fields, and its strong presence in Africa means that it is a natural place to grow my practice. I very much look forward to working with team”, says Natasha Peter.

Trinity International is a boutique global law firm focussed on energy and infrastructure projects across emerging markets. The team advises investors and developers, commercial and development banks, and governments.

Founded in 2006 by Trinity’s Global Senior Partner Paul Biggs, Global Managing Partner Simon Norris and Senior Consultant Patrick Leece, the firm's senior-led team of nearly 40 lawyers is recognised for its experience in projects and corporate and finance transactions in Africa, the Middle East and other emerging economies, including conflict management and dispute resolution arising from the same. Trinity International has significant expertise in energy projects (renewable and thermal), oil and gas, mining, infrastructure, telecoms, roads and other transport infrastructure.

Trinity International proposes a unique service which combines know-how and innovative fee structuring. This positioning, aligning the firm with the interests of its clients and projects, favours sustainable economic development in emerging economies.

Trinity International has offices in London, Paris and Washington DC and has a strong network of local lawyers with which it partners in the countries in which it works. http://www.trinityllp.com

Poupak is an English barrister and a partner in the London office of Trinity International. She heads up the disputes and international arbitration practice. She is a construction disputes lawyer by background, with more than 26 years’ experience in the energy, construction and engineering industries Her experience ranges from construction disputes to shareholder disputes to purely commercial disputes arising from project documents including supply and offtake agreements.. She has also undertaken a great deal of transactional work in the petrochemicals, power and infrastructure sectors.

Before joining Trinity International, Poupak was an international arbitration partner in Baker Botts, and prior to that she was a partner in Norton Rose Fulbright. Uniquely, Poupak has knowledge and expertise in both international arbitration and projects work, derived from her roles as an associate in the Construction and the International Arbitration departments of White & Case for 10 years, the Energy department of Masons (now Pinsent Masons) for 5 years, and her work as the General Counsel of a company involved in the development, construction and operation of petrochemicals projects for 4 years.

Poupak is in a distinctly advantageous position when advising on and representing clients in disputes arising from projects, by reason of her knowledge of and expertise in projects. Projects work remains a cornerstone of her practice.

Poupak received her LLB (Hons) from University College London in 1995, completed the Inns of Court School of Law Bar Vocational Course in 1996 and was called to the Bar of England & Wales in October 1996. She undertook her training at the bar, completing her pupillage at Keating Chambers which is one of the two leading construction chambers in the UK.

Natasha Peter is a dual-qualified English barrister and French avocat. She has over 20 years’ experience in international arbitration, litigation and dispute management.

Natasha is specialised in construction and engineering disputes, including in the power, renewables, and oil & gas sectors. She has an in-depth familiarity with delay, disruption, technical and quantum issues arising in this context, and is also experienced in, and trained in, construction adjudication, disputes boards and mediation. In addition, she regularly acts in joint venture and post M&A disputes, including those involving complex valuation, financial and jurisdictional issues. She has an MSc in Finance from the University of London and brings this financial knowledge to bear on these cases.

Prior to joining Trinity, Natasha was counsel at the French law firm Gide Loyrette Nouel, representing large multinational companies, states and individuals in high-value disputes. She started her career as a barrister practicing from a leading commercial and public law chambers, 4-5 Gray’s Inn Square, in London.

As a result of her mixed common law/ civil law and litigation/ arbitration background, Natasha has had the opportunity to work in a diverse range of environments. She adopts a client-focused, detail-oriented approach to cases, ensuring that the client's commercial strategy is a central part of the overall case dynamic.

Natasha sits as a Deputy District Judge on the South-eastern Circuit of England and as an arbitrator. She is a Fellow of the Chartered Institute of Arbitrators and a visiting lecturer at the Paris II Panthéon-Assas University, where she teaches drafting and written advocacy skills. She regularly publishes articles and conducts seminars on topics relating to international arbitration, commercial/ contract law and alternative dispute resolution. She is the editor of Atkins Court Forms on "Bonds", and a contributor to the "Delos Guide to Arbitration Places: Morocco", the "GAR Commercial Arbitration Know-How: France" and the "Panorama of English Case Law" in the Cahiers d’Arbitrage.