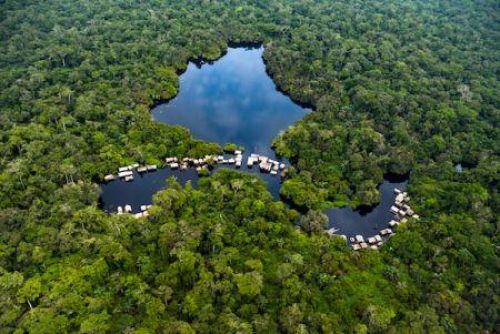 (Ecofin Agency) - The Congo rainforest sequesters more CO2 than the Amazonian and Southeast Asia combined. It is the most important tropical carbon sink. Yet, the funds raised to save that most important rainforest remain ridiculously low.

The Congo rainforest sequesters an average of US$30 billion worth of carbon yearly, according to a report published by the independent think tank Center for Global Development last November.

The report, entitled "How Much Should the World Pay for Carbon Removal in the Congo Forest?" states that this estimate was derived by multiplying the amount of carbon sequestered by this second-largest tropical forest after the Amazon rainforest by the social value of carbon (a concept that refers to all the potential social, economic and environmental benefits of not releasing carbon into the atmosphere).

According to estimates by the Center for Global Development, the Congo rainforest, which spans over  298 million hectares and covers six countries (Cameroon, Central African Republic, DRC, Equatorial Guinea, Gabon, and the Republic of Congo), absorbs approximately 600 megatons of CO2 each year.

In 2020, the authoritative  US Interagency Working Group on Social Cost of Greenhouse Gases estimated the social carbon value to be US$50 per ton.

The value of carbon absorbed by the Congo rainforest could have reached US$55 billion (36% of the GDP of the countries it covers)  per year if this particular ecosystem had not been severely affected by deforestation.

Because of various human activities such as unsustainable logging and extractive activities, deforestation results in both a decrease in the capacity of forests to sequester carbon and a release of large amounts of previously stored CO2.

This is not yet the case for the Congo rainforest. Currently, it absorbs more carbon than the Amazon and Southeast Asia combined, making it the largest tropical carbon sink. This “green heart of Africa” absorbs 1.1 gigatons of carbon (1 gigaton = 1 billion tons) per year and releases only 530 megatons. It thus sequesters some 600 megatons of CO2 each year.

The report also notes that the high net value of carbon sequestered by the Congo Basin forest contrasts with the levels of funding mobilized to save this increasingly threatened “green lung”. Over the 2011-2020 decade, the average yearly official development assistance for the protection of all African forests was US$170 million, 150 times lower than the value of the carbon captured by the Congo rainforest.

The private sector mobilized an average of US$100 million yearly, between 2012 and 2020,  for forest preservation worldwide. Just one-third of the financing was destined for Africa.

“With very low income levels in each of [the countries hosting the Congo rainforest], it’s not surprising that they are pursuing economic opportunities that involve deforestation,” the report says calling for increased international public funding for these countries, which, by preserving their forests, provide a vital service to the world.