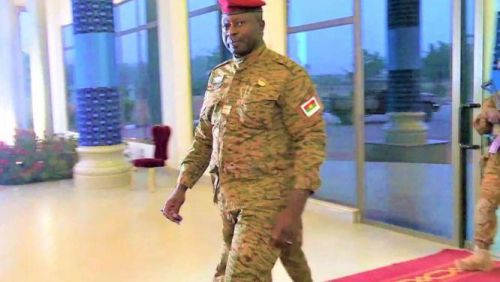 (Ecofin Agency) - The head of the military junta, that ruled the country since January 2022, agreed to resign and headed to Lome, Togo.

His resignation, announced in a joint statement by leaders of religious and customary communities who acted as mediators between the incoming and outgoing military rulers, came with conditions nevertheless.

According to the mediators, Lieutenant-Colonel Damiba required seven guarantees before his resignation. First, he required the rights and safety of both him and his collaborators to be guaranteed. Then he required an assurance that soldiers supporting him would not be prosecuted and commitments made to ECOWAS, being the return under civil rule within two years, be respected.

The conditions were accepted by Captain Ibrahim Traoré, the new leader of the Patriotic Movement for Safeguard and Restoration (MPSR), the transitional military junta proclaimed in Burkina Faso after the January 24, 2022 coup. A few hours later, he left Burkina Faso for Lome (Togo), where official sources confirmed his arrival.

In a statement released Sunday evening, ECOWAS praised the various parties for agreeing to peacefully settle their differences. It also noted the decision, by Lieutenant-Colonel Damiba, “to resign as president of the transitional government [...] to avoid a violent confrontation and a possible bloodbath.” ECOWAS also asked Burkinabe authorities to stay by their commitments to organize presidential elections, for constitutional order, by July 2024.

Following Lieutenant Colonel Damiba’s dismissal was announced on the evening of Friday, September 30, a 438-hour uncertainty hit the winning camp. Indeed, despite demonstrations supporting the coup plotters, the now former military ruler clearly indicated he would not resign.

Captain Ibrahim Traoré now has the military chain of command’s support up “till the day the President elected by the civil population is sworn into office.”