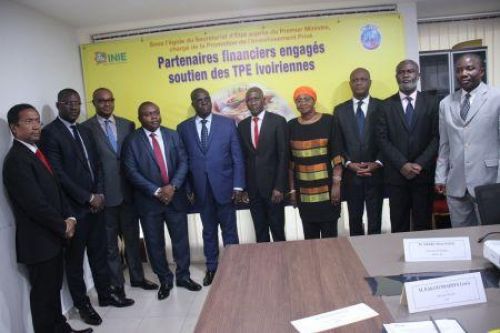 Named TPE/PS-GOUV and conducted by the Ivorian Institute of Enterprise (INIE), this project aims to create 35,100 very small businesses (VSEs) in 234 communities (municipalities, regions and autonomous districts), with an average of 140 VSEs per community.

The project is expected to last 39 months and generate a total of 52,000 direct jobs. It was designed according to the “CLONIX” model developed by INIE, which consists in “recreating a large number of viable companies, sort of clones, throughout the national territory, based on successful models, whether they be very small businesses, SMEs or mid-cap companies.”

According to the Secretary of State to the Prime Minister for the Promotion of Private Investment in Côte d'Ivoire, Emmanuel Essis Esmel (photo), “this project falls in line with the axis 4 of the Government's Social Program (SP Gouv) on employability of youth and empowerment of women.”

He believes “this financing will boost self-employment and economic growth in the country.”