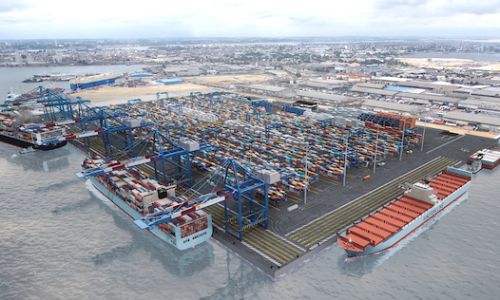 (BOLLORE ) - On Monday 5 October 2020, Bolloré Ports, APM Terminals and the Côte d’Ivoire government are launching the construction work on the Côte d’Ivoire Terminal, the second container terminal at the Port of Abidjan.
Representing an investment of 262 billion CFA francs, the Terminal construction work will last 18 months and consist in surfacing and developing the reclaimed land and connecting the Abidjan railway network. This will be followed by the construction of the buildings and the acquisition of cutting-edge equipment.

With a surface area of 37.5 hectares, the new container terminal will be able to process over 1.5 million TEU containers a year and welcome ships with a draught of 16 metres on 1,100 metres of wharves. The new terminal will generate 450 direct jobs and thousands of indirect jobs and contribute to upskilling with a view to training young Ivorians on the port professions and the handling of latest-generation equipment.

“The new container terminal will be more competitive and foster intra-African trade, create high-performance logistics ecosystems and bolster the development of local processing industries. It will also rank as a transshipment hub for neighbouring coastal countries and a preferred entry point for landlocked countries such as Burkina Faso, Mali and Niger,” said Philippe Labonne, Chairman of Bolloré Ports.

Thanks to the expertise of Bolloré Port and APM Terminals, the second container terminal will provide greater capacity for receiving goods at the Port of Abidjan and enhance the flow of the country’s imports and exports while contributing to the well-being of the population. It will also serve to drive the development of agricultural value chains and notably benefit local cocoa, cashew and mango producers.

Connected to the Côte d’Ivoire capital, the new terminal will be built in compliance with the most stringent environmental and social standards and will obtain “Green Terminal” certification for its clean-energy powered equipment.