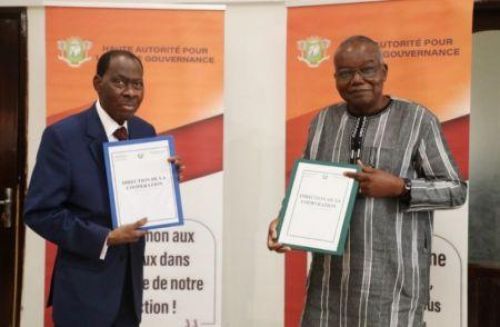 (Ecofin Agency) - In its 2021 ranking, Transparency International placed Côte d'Ivoire and Burkina Faso 104th and 86th respectively among the most corrupt countries in the world. While national initiatives already exist, the two countries want to pool their efforts to be more effective.

Côte d'Ivoire and Burkina Faso signed yesterday a partnership agreement to strengthen their cooperation in the fight against corruption. The information was made public on the Ivorian government’s official web portal.

The deal aims to facilitate the prevention, detection, investigation and fight against corrupt activities at the border between the two countries. According to N'golo Coulibaly, president of the High Authority for Good Governance, from now on no one can escape justice by simply crossing the border.  Ultimately, the objective is to pool the efforts of all the countries in the sub-region, "and even beyond".

Anti-graft initiatives are also deployed at national levels. Recently, Côte d'Ivoire has launched its “coup de poing” operation to crackdown on corruption. Zoro Epiphane Bi Ballo, Ivorian Minister for the Promotion of Good Governance, Capacity Building and the Fight against Corruption, said no sector would be spared by this anti-corruption campaign.

In this year's Transparency International Corruption Perceptions Index (CPI) report published in January, Côte d'Ivoire moved up two places. The country scored 36 points and is ranked 20th in Africa and 104th in the world out of 180 countries evaluated. Burkina Faso was ranked 86th.