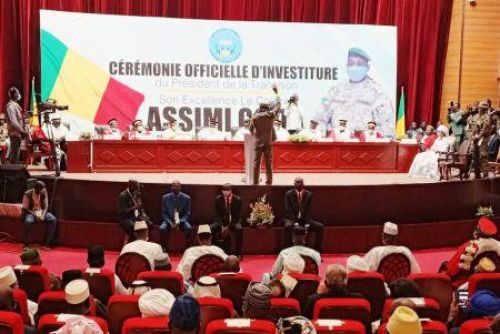 (Ecofin Agency) - Malian President Assimi Goïta is going to allocate most of the President's sovereignty funds to the social sector. He made the announcement on June 7 during his swearing-in ceremony in Bamako.

It was at 11:30 am local time that the head of state took the oath before the Malian Constitutional Court and an assembly of representatives of political parties and international organizations gathered at the International Conference Center of Bamako.

"I swear before God and the Malian people to preserve the republican regime, to respect and uphold the Constitution, the Transitional Charter and the law, and to preserve the democratic gains," he said as he took office, in accordance with the national Constitution.

The new leader gave a strong speech, detailing the main guidelines of his term. Assimi Goïta wants to focus on social investments and reforms necessary to put the country back on track. He promised he will reduce the government’s lavish lifestyle for the benefit of the population.

"I have already decided to allocate two thirds of the President's sovereignty funds, or CFA1.8 billion annually to social and health works, in particular to facilitate access to drinking water and primary health care in areas that are difficult to access," he said to a standing ovation from the VIPs present. "No group will be left out, because Mali needs each and every one," he added.

The Head of State reaffirmed his commitment to "put the transition process back on track with the people's wishes" and to organize "credible, fair and transparent elections as scheduled."

This swearing-in comes a few days after the Constitutional Court declared Mali's power vacuum and announced the appointment of Assimi Goïta as head of the transition. The main instigator of the August 2020 coup that led to the fall of former President Ibrahim Boubacar Kéïta, he was considered for several months as the real strongman of Mali, despite the position of vice-president that he held. As proof of his role as a metronome of Malian political life, he was the one who pushed out the previous leaders of the Transition, namely: former President Bah N'Daw and former Prime Minister Moctar Ouane.

The ceremony confirms the military leader's hold on Malian power, which he seems to have always controlled since his first coup in 2020. In response to the second coup that led to the appointment of Colonel Goïta as president, ECOWAS and the African Union decided a few days ago to suspend Mali from their bodies.

The U.S. and France also announced they would suspend their joint military operations with Mali until a transition process led by a civilian government is in place. More recently, the World Bank decided to suspend its financial operations with Bamako until the current situation improves.

With all these pressures, Assimi Goïta reassured of his intentions to leave power at the end of the transition, and to put in place a civilian government in the next few days. "I would like to reassure the various sub-regional and regional organizations and the international community in general that Mali will honor all of its commitments for and in the supreme interest of the nation.”

The leader promised that he would do everything possible to calm the social climate. He said he would allocate more resources to the fight against insecurity, and continue to implement the resolutions taken within the framework of the agreement for peace and reconciliation in Mali, resulting from the Algiers process.