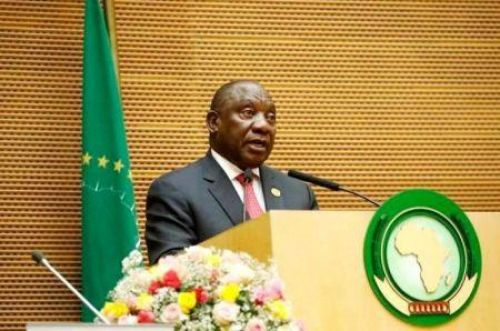 (Ecofin Agency) - Yesterday Feb 9, South Africa’s President Cyril Ramaphosa officially became the President of the African Union for 2020. He is replacing Egyptian Abdel Fattah al-Sissi who held the position last year. The handover ceremony was held during the 33rd Session of the African Union Assembly in Addis Ababa, Ethiopia.

The newly elected AU Chairman said his tenure will focus on economic integration and security. He announced that an extraordinary summit to be held in May to find effective solutions to the escalating terrorist attacks on the continent. The implementation of the African Continental Free Trade Area (AfCFTA) will also be discussed.

Cyril Ramaphosa also vows to end conflict in Libya and the Sahel region. “The principle of finding African solutions for African problems must be our over-riding theme in addressing all the conflicts on our continent as we work within the frameworks of the AU and the United Nations,” he said, claiming that until all Africans are free, no one is free.

When Mr. Ramaphosa ends his term at the end of the year, he will hand the baton to Félix Tshisekedi, President of the Democratic Republic of Congo (DRC).