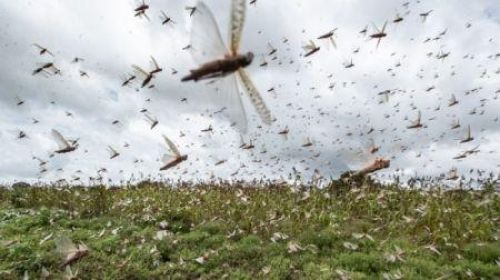 (Ecofin Agency) - The European Union (EU) yesterday released €15 million for locust control in East Africa. The money should help strengthen the capacity of UN organizations engaged in the fight, such as FAO, as well as partner countries.
This EU support comes at a time when many countries such as Ethiopia, Kenya, Somalia, Sudan, and South Sudan are facing the threat of a new wave of locust swarms due to heavy spring rains.

“I want to thank the European Union for its generous contribution and sustained support. The battle against the Desert Locust is a long one and far from over. Sustained support is critical if we are going to contain this pest threat,” said FAO Director-General Qu Dongyu.
“Our friends and partners in the Horn of Africa have experienced the catastrophic consequences of this Desert Locust outbreak on livelihoods and food security, a situation that is aggravated by the coronavirus pandemic which has made intervention efforts more difficult,” said Jutta Urpilainen, EU Commissioner for International Partnerships.

According to FAO estimates, control operations undertaken since January in the Horn of Africa and Yemen have helped to treat 500,000 hectares and preserve one million tons of crops.

As a reminder, the EU had already contributed €11 million to locust control in February.