Egypt seeks to strengthen bilateral cooperation with the U.S. 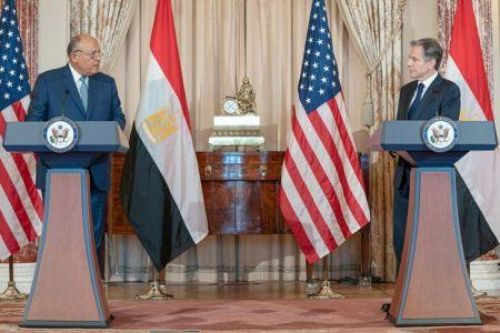 (Ecofin Agency) - Egypt has long been Washington’s strategic political and security partner in the Arab world.  The two allies now seek to expand their partnership more commercially and economically.

The Egyptian Foreign Minister Sameh Shoukry met on November 8 with his American counterpart Antony Blinken. This was on the sidelines of the US-Egypt strategic dialog held on November 8-9, 2021, in Washington, D.C. Both parties discussed ways to deepen their bilateral relations and address regional and international challenges of common interest.

They want to focus on trade, energy, research and development, technology, higher education, cultural exchanges, and health care. Shoukry said a strengthened relation between Egypt and the US will allow the African state to better face local challenges, including terrorism and extremist ideology, and support its tireless efforts to achieve “a greater and more inclusive growth and economic development for the Egyptian people.”

Discussing the situation in Libya and Palestine, the Egyptian minister expressed the need to hold presidential and parliamentary elections in Libya by the end of the year to restore stability. Shoukry said it is also necessary that all foreign forces and mercenaries withdraw from the Libyan territory.

Meanwhile, the US called on Egypt to make "tangible and lasting improvements on human rights." According to Antony Blinken, this is essential to strengthening relations with Cairo, under the foreign policy of the Joe Biden administration.

Blinken encouraged Egypt's efforts to launch a human rights strategy and reiterated U.S. support for the implementation of this strategy's key objectives. These include civil and political rights, freedom of expression, combating racism, women’s empowerment, and economic, social, and cultural rights.

Egypt and the US have been working together for several years to maintain the balance with Israel, Turkey, and Iran. Moreover, Egypt's commitment to maintaining the Egyptian-Israeli peace and its role as a key mediator in the Israeli-Palestinian conflict is a primary factor in the consolidation of its relations with the United States. Considered as one of the main players in the process of stabilization of the Middle East, the Egyptian army enjoys the military support of the US.