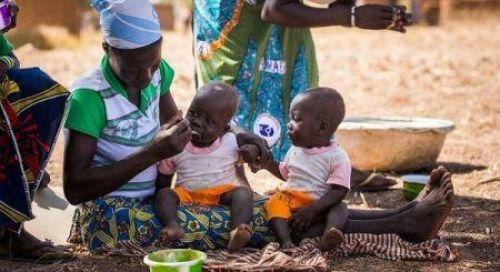 (Ecofin Agency) - UN forecasts show that by 2023, the number of food-insecure populations could rise in Central and West Africa, which face tense security and food situations if actors fail to take action. Per its estimate, nine million children are at risk.

The number of hungry people in Central and West Africa could rise to 48 million in 2023, a recent World Food Program release informs.

According to the Organization, in the region,  more than 35 million people (including 6.7 million children) - about 8% of the estimated population - are currently unable to meet their basic food and nutritional needs. The situation is particularly alarming in the conflict-stricken zones of the Lake Chad Basin and the Liptako-Gourma region (Burkina Faso, Mali, and Niger), and, failure to take urgent and long-lasting action could increase the number of children affected to 9 million, the release warns.

This prediction is based on persisting security and climate challenges that are forcing millions of people out of their homes despite governments’ efforts in the region.  "Despite the good harvest prospects, improved market situation, and increased cereal production estimates across the region, food insecurity, and malnutrition persist and are spreading from the Sahel towards coastal countries due to persistent insecurity, climate shocks, high food prices, the economic fallout from COVID-19, and the impact of the conflict in Ukraine," the release reads.

“Across Benin, Cote d’Ivoire, Ghana, Guinea, Guinea-Bissau, Liberia, Sierra Leone, and Togo, the Cadre Harmonisé analysis reveals a 20 percent increase in food insecurity in the last quarter of 2022, compared to the same period last year. In Nigeria alone, 25 million women, men and children are facing moderate or worse food insecurity, meaning they can easily fall into an emergency food security situation if no immediate response is provided,” it adds.

The food insecurity affecting the region is fueled by security challenges but also by the rise in food prices since late 2021. Inflation makes it difficult for populations to access basic products. Despite numerous actions taken by governments, the inflationary pressure has remained on its rising course. To avoid a catastrophic scenario in 2023, the UN is calling on governments in the region to increase their support and investment in food security and nutrition programs. In early December, it estimated that US$51.5 billion would be needed to help 230 million of the world's most vulnerable people by 2023. This amount, according to its officials, will be difficult to mobilize, given the performance of the year 2022, when only 47% of the requested funding was mobilized.