Madagascar: Yields increase for youth enterprises, thanks to an African Development Fund project 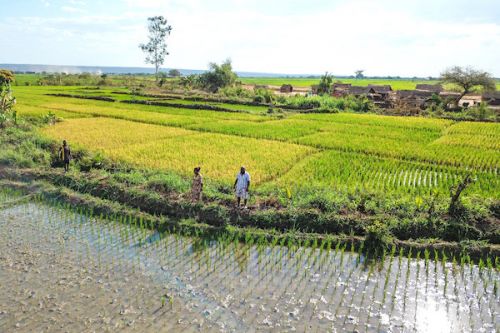 Rice yield tripled in Bongolava and Amoron’i regions thanks to an African Development Bank project.

( AfDB) - Launched in 2016, the Young Rural Enterprises Project in the Central West of Madagascar has helped improve agricultural yields. Yields of rice and maize doubled, according to a project progress report released by the African Development Bank on 30 August 2022.

The African Development Fund, the Bank Group's concessional window, provided the project with $23.42 million in financing, which was supplemented with $11.28 million from the Bank Group's Transition Support Facility.

The project has enabled the development of 13,086 hectares of land, including 2,064 hectares in the lowlands. Around 11,000 hectares of land were equipped with irrigation kits for youth enterprises. Around 165 kilometres of rural tracks were developed and support was provided to 82 seed production units. Seven land offices were built, enabling 5,654 title deeds to be issued to producers.

Two school buildings, 40 housing units for young entrepreneurs and 14 wells have been built out of the 50 planned. "The construction of the rest of the wells will continue, as will the construction of health facilities, police stations and other facilities," the Bank Group report states.

The project also recorded several successes in supporting livestock production. Of note is the distribution of 154 indigenous piglets in the Bongolava region in 2019; the distribution of 330 improved breed piglets in the Bongolava region (220 piglets) and in the Amoron'i Mania region (110 piglets) in 2020. Support to the 139 pig breeders operating in the two regions has resulted in the production of 90.4 tonnes of pork, including 26.08 tonnes for Amoron'i Mania and 64.32 tonnes for Bongolava.

A total of 379 youth-owned enterprises are benefiting from financing through the National Bank of Industry, a partner bank.

"The completion of this project and especially the implementation of the second phase, which will cover more regions, will have a definite impact on production and productivity for better food security in the project's intervention zone. It will also have an impact on job creation and poverty reduction in Madagascar," concludes Moussa Morou, project manager at the African Development Bank.