AU calls for a return to calm in South Africa 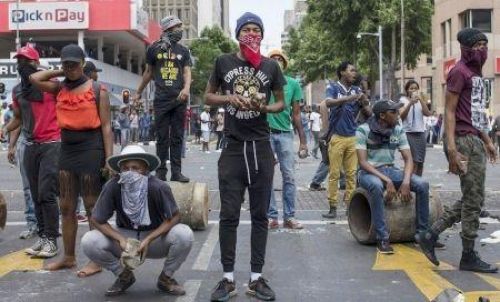 (Ecofin Agency) - Since Jacob Zuma got arrested last July 7, South Africa has been going through waves of violence that have resulted in 72 deaths so far. Several observers believe that the country's economic difficulties are contributing to the crisis and the police seem powerless to deal with the situation.

The African Union (AU) has condemned the violence that has been going on for nearly a week in South Africa. In a statement issued on Tuesday, July 13, AU Commission Chairperson Moussa Faki Mahamat called on the authorities to do everything possible to restore order in the country.

“The chairperson of the African Union Commission, Moussa Faki Mahamat, condemns in the strongest terms the surge of violence that has resulted in the deaths of civilians and appalling scenes of the looting of public and private property, destruction of infrastructure, including the suspension of essential services in KwaZulu-Natal, Gauteng and other parts of South Africa,” the AU said in a statement.

“The chairperson calls for an urgent restoration of order, peace and stability in the country in full respect of the rule of law.”

Since the imprisonment of former president Jacob Zuma for contempt of court, the country has been plagued by sporadic violence initially attributed to pro-Zuma protesters. However, many observers believe that while the movement was indeed triggered in response to Zuma's arrest, its intensification over the past few days indicates that it has gone beyond support for the former head of state. According to analysts, the outbursts are also rooted in the country's socio-economic difficulties.

Despite the deployment of the forces of law and order supported by the army, looting, fires, and stampedes continue to occur in the country. According to the police, at least 1,234 people have been arrested, while the number of deaths has risen to 72.

Moussa Faki Mahamat extends his deepest condolences to the families of the victims and wishes a speedy and full recovery to the wounded. AU says failure to restore order and stability may have serious consequences not only for the country but also for the region as a whole.