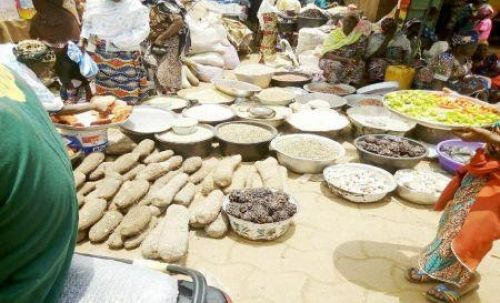 (Ecofin Agency) - People in Benin have been experiencing in recent months a sharp increase in the prices of necessities. The government attributes the situation to very low rainfall and massive exports of local production. Despite the control recently imposed on exports, prices went up 2.7% month-on-month in June 2021 according to the National Institute of Statistics and Economic Analysis (INSAE).

Households in Benin continue to face a sharp increase in the price of necessities. In the Harmonized Index of Consumer Prices (HICP) for June 2021, the National Institute of Statistics and Economic Analysis (INSAE) found that prices climbed by 2.7% MoM.

According to the institute, the situation is the result of the rise in prices of several food products, and that of several basic services.  The "food and non-alcoholic beverages" category saw its prices rise by 6.4% while the category "housing, water, gas, electricity, and other fuels" experienced an increase by 1.4% in prices.

Food products that have essentially contributed to this increase are fresh vegetables (fruit or root) whose prices have risen by 42.1% due to the "scarcity of fresh local tomatoes, fresh onions, and eggplant, which generate strong speculation in the markets.” Oils follow (+13.4%) due to strong speculation on the prices of vegetable oils such as palm oil, peanut oil, and cottonseed oil.

Other products such as tuber and plantain also saw their prices rise 13.1% last month, linked to the higher price of gari (lower cassava production) and strong speculation. The "scarcity of chili, linked to seasonality" also led to a rise in prices for "salt and spices" products (+9.2%), while prices for fresh fish climbed 6.3% due to a decline in the supply of products such as fresh mackerel and fresh sea bass.

As for unprocessed cereals, their prices have risen by 7.7% due to the increase in the price of dried corn "because of seasonality," while solid fuels used mainly for cooking and catering have seen their prices rise by 11.9%, "due to lower supply in the charcoal, firewood, and sawdust or wood shavings markets during this rainy period.”

This price increase, which affects the purchasing power, has led to discontent among some of the population. In a communiqué issued by the Council of Ministers on June 16, the government indicated that no tax had been imposed on these products. "The cost increase is due, on the one hand, to the low rainfall observed since the last agricultural season and, on the other hand, to the massive export of production to neighboring countries.”

Pending more specific measures, the authorities have instituted controls to "avoid uncontrolled outflows of agricultural products. This measure was intended to prioritize domestic over foreign consumption, but it does not seem to have succeeded in curbing the surge in commodity prices. Compared to June 2020, the prices of necessities are up 4.6%.