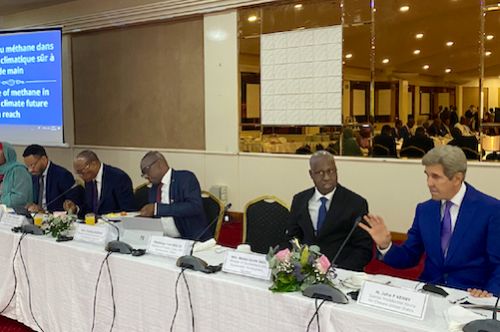 (AfDB) - The United States government has announced it will provide a $5 million grant to the African Development Bank to support efforts to abate methane gas emission, across Africa. Methane accounts for about half of the net rise in global average temperature since the pre-industrial era.

The grant, subject to the completion of US domestic procedures and approvals, will go to the multi-donor Africa Climate Change Fund, which is managed by the African Development Bank. The Fund supports a broad range of activities covering climate resilience and low-carbon growth.

US special presidential envoy for climate John Kerry, made the announcement at a breakfast event held on the margins of the 18th African Ministerial Conference on the Environment taking place in Dakar.

He said: “More than 25 countries on the continent have joined the Global Methane Pledge, a resounding level of support for the importance of methane in keeping 1.5 degrees within reach.”

“I am very pleased that the African Development Bank is responding to the increased global attention on methane emissions and is planning to increase their own focus on methane abatement in coming years,” Kerry added.

Additional funding was also promised by the Climate and Clean Air Coalition (CCAC) and the Global Methane Hub to tackle methane emissions in African countries. The Global Methane Hub will contribute $5 million dollars over the next three years. The Hub funds methane mitigation efforts. The Coalition, a voluntary partnership of governments, intergovernmental organizations, businesses, and research institutions, will provide $1.2 million.

The Global Methane pledge, launched during COP26, targets reducing emissions of methane by at least 30 percent from 2020 levels over the next seven years.

“With the support of the U.S. government, and other donors and non-state actors, we intend to create a dedicated pillar of activities within our Africa Climate Change Fund to support methane abatement including working with countries to include methane in their Nationally Defined Contributions and develop pipelines of methane abatement projects for further investment,” Kariuki said.

The African Development Bank would be releasing a methane baseline reporting covering waste and energy sector methane emissions across Africa at the forthcoming COP 27 in Sharm El Sheikh, Egypt.

“This will provide an excellent foundation for increased focus on methane emissions,” said Kariuki.

The African Development Bank’s 2022 Africa Economic Outlook projects that Africa will need as much as $1.6 trillion between 2020-2030 to implement its climate action commitments and NDCs.

The African Development Bank has committed to mobilizing $25 billion for climate finance by 2025; more than 50% of that funding will be allocated to adaptation projects.

The resumed five-day 18th Session of the African Ministerial Conference on the Environment in Dakar, ends on Friday 16th of September. Organized by the United Nations Environment Program, it provides African environment minsters a forum to offer policy guidance that will contribute to strengthening Africa’s voice at the COP27.

The Africa Climate Change Fund (ACCF) was established in April 2014 to support African countries in building their resilience to the negative impacts of climate change and in transitioning to sustainable low-carbon growth. It was conceived as a bilateral trust fund with an initial untied contribution of EUR 4,725,000 from Germany for an initial period of three years, with the objective to scale-up to a multi-donor trust fund as soon as at least one new donor was ready to join. The ACCF converted to a multi-donor trust fund in March 2017 for a five-year period initially expiring in March 2022 with contributions from Italy, the Flanders region of Belgium, Canada and Quebec. The duration of the Africa climate change fund has recently been extended for a further five years to 2027 and the African Development Bank has broadened its scope to address the goals of the Glasgow Climate Pact which include amongst other things the Global Methane Pledge.

The ACCF is hosted and managed by the African Development Bank, and complements other Bank trust funds with a scope that was designed to be sufficiently broad to cover various types of activities related to climate resilient and low carbon growth.