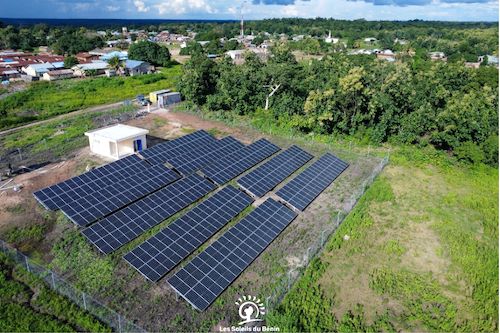 (NEoT) - NEoT Offgrid Africa, GDS International, and ARESS have agreed to join forces to enter the very promising rural electrification sector in Benin by creating a joint company, Les Soleils du Bénin. The partnership begins with a first flagship project aiming to electrify 12 localities in Benin within a year. This project is operated within the framework of the call for project proposals launched by the MCA-Benin II Offgrid Clean Energy Facility (OCEF) on funding from the Millennium Challenge Corporation, which is the pilot phase of the newly implemented off-grid electrification regulation in the Republic of Benin, a first in West Africa.

The project represents an investment of €8.5 million, co-financed by NEoT Offgrid Africa, as a financial partner of the project, and MCA Benin II. The goal is to install 1.7 MW of photovoltaic capacity and 3 MWh of battery capacity in all 12 localities, supplying more than 5,000 homes and businesses with electricity. The project has been developed by GDS International, and will be co-constructed by GDS International and ARESS. ARESS will also be the project operator.

The combined expertise of these three partners will enable them to create autonomous, connected, and environmentally friendly power grids intended to improve the availability of electric current and access to electricity for public infrastructures, SMEs, communities, and households.

In order to complete this transaction, NEoT Offgrid Africa has received support from leading players in the field of rural electrification in Africa: Altai, for the commercial side, DNV for the technical side, Royal Haskoning for the environmental and social sides, and Trinity for the legal side.

Idris TAYEBI, Director of NEoT Offgrid Africa: “NEoT Offgrid Africa is very proud to participate in this ambitious project alongside GDS International and ARESS. This MCA-Benin II program, in collaboration with local authorities in Benin, provides a structured regulatory framework to promote investment from private players such as NEoT Offgrid Africa. We hope that this initiative will give rise, in Benin and elsewhere in the region, to other electrification programs using decentralized solar energy as an energy solution for isolated or landlocked regions.”

Daniel BOUR, President of the Générale du Solaire Group: "We are proud to participate in this innovative and promising project. The success of this partnership encourages us to develop similar actions in the region. The MCA-Benin II program is an exemplary initiative which we hope will inspire other development agencies and other countries to replicate this experience and further mobilize the private sector. This is a unique way to deploy solar energy quickly and massively enough to meet the needs of populations, and meet the challenges of climate change.”

Léonide Michael SINSIN, Managing Director of ARESS: “This innovative project allows us to address one of the many facets of energy access: mini-grids. It helps us strengthen the footprint of our group in the sub-region, and to explore new know-how to ensure the energy supplied is sustainable and competitive. This project will be a great opportunity to reduce inequalities and reinforce the attractiveness of the regulatory framework and structural reforms underway in Benin.”

NEoT Offgrid Africa (NOA) is an investment platform designed to support the energy transition in Africa by responding to energy access issues. Founded and owned by Meridiam (as majority shareholder) and EDF, NOA develops innovative financing solutions for its partners to remove obstacles related to initial investments, the deployment of new technologies, and the management of commercial risk. .

NOA is managed by NEoT Capital, which has assembled a team experienced in financial structuring and clean energy solutions to work together with international strategic partners to provide the financial and operational support necessary for the development of a carbon-free world. More information on www.neotcapital.fr

About the Générale du Solaire group

Created in 2008 on the initiative of Daniel Bour, the Générale du Solaire group provides expertise in the development, engineering, construction, financing, and operation of photovoltaic power plants, as well as being an independent producer of electricity in France and abroad.

Present across the entire value chain, Générale du Solaire pilots all solar projects, from their development to their operation.

The group, which employs around 80 people, mainly at its headquarters in Paris and its branch in Montpellier, expects to generate a forecast turnover of €100 million in 2022 from all its activities.

Générale du Solaire is one of the leaders in ground-mounted and roof-mounted solar power plants, both in France and internationally, where the dynamism of emerging markets is making a major contribution to its growth.

The Group owns more than 300 MWp of solar power plants in France. Générale du Solaire also has a strong presence abroad and currently has nearly 1,000 MWp of projects under development worldwide.

With more than 380 projects awarded by the Commission de Régulation de l'Energie, and 1,000 MWp of projects under development in France, Générale du Solaire is one of the leading players in the sector. More informations on www.gdsolaire.com

Created in 2012, ARESS is a subsidiary of the MYJOULEBOX group specializing in the marketing of solar systems. ARESS is currently operating in 4 West African markets, and aims to become one of the main private energy operators on the continent.

With a workforce of approximately 80 people, one third of whom are women, ARESS's vision is to be a pioneer in the field of new energies and applications. Excellence in our trade, the quality of our products and services, innovation, and dignity are the values for which we stand. More informations on www.aress.solar