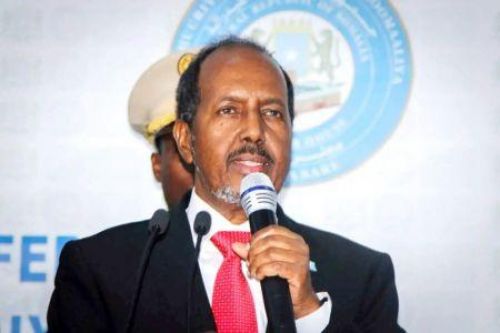 (Ecofin Agency) - On Sunday, May 15, Somalia held its presidential elections, after several postponements over an about one year period. The winner is Hassan Cheikh Mohamoud, the former president who served between 2012 and 2017.

Hassan Cheikh Mohamoud (photo) is the new President of Somalia. The incoming Head of State was elected, Sunday (May 15), by the parliament, winning 165 votes out of 329. The former president was elected out of 36 candidates, including current president Mohamed Farmaajo. His election marks the end of a long journey during which the election was postponed several times for political reasons.

As was the case during his first mandate (2012-2017), the president-elect will have to address several security challenges that seem to be the root causes of the socio-economic problems facing Somalia.

Indeed, for years now, the country is the target of repeated attacks from the Islamic insurgence group al-Shabaab, which is resisting both national and foreign troops. Coupled with the impacts of drought on the country, the attacks will be the major challenge to  Hassan Cheikh Mohamoud’s second term in office.

The outgoing president’s defeat appears like a show of dissent because of political conflicts caused mainly by President Farmaajo’s 2021 decision to extend his term.

Meanwhile, Hassan Cheikh Mohamoud promises to rebuild the broken trust between the federal government and federal states. With his election, he becomes the first president to serve two presidential terms in Somalia.