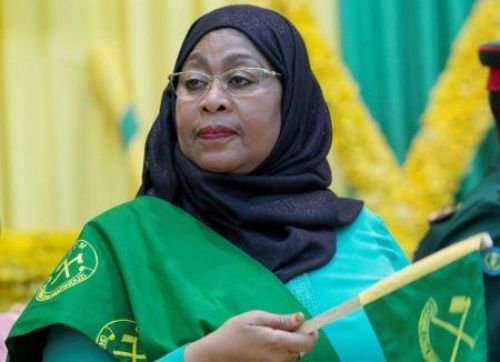 (Ecofin Agency) - Tanzania's Vice President Samia Suluhu (pictured) will become the first female president of the country, replacing John Magufuli, whose death was announced on the night of March 17, 2021.

She was the one who reported the death of the president on television saying “we have lost our courageous leader, President John Magufuli, who died at 6 p.m. of heart disease.” She declared a 14-day national mourning period.

Under the Tanzanian constitution of 2005, “when the office of President becomes vacant because of death […] then the Vice-President shall be sworn in and become the President for the unexpired period of the term of five years and per the conditions set out in Article 40, and, after consultation with the political party to which he belongs, the President shall propose the name of the person who shall be Vice-President and such appointment shall be confirmed by the National Assembly by votes of not less than fifty per centum of all the Members of Parliament.”

Except in exceptional cases, Samia Hassan Suluhu who was already the first female Vice President of the country will replace John Magufuli. According to the latest available data, 61-year-old Magufuli died at the Emilio Mzena State hospital in Dar es Salam. While there are rumors that he died from Covid-19, the government said he has been suffering from heart diseases for years and that is what killed him.

The “bulldozer” took power in 2015 and put the fight against corruption at the heart of his term. In 2020, he won a second 5-year term. His stance against the coronavirus pandemic was criticized all over the world as he refused to acknowledge the seriousness of the situation. As a response to the pandemic, he only invited his fellow citizens to pray and drink herbal remedies. He even declared his country Covid-19-free.