China calls for early approval and disbursement of Zambia's ECF 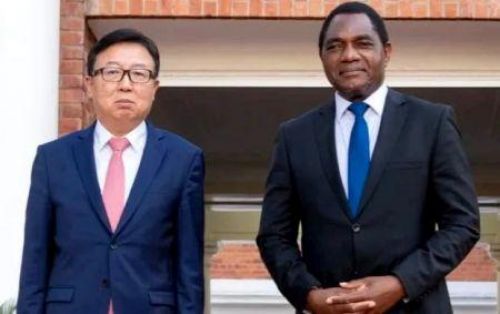 (Ecofin Agency) - Zambia has reached an agreement in principle with the IMF for a US$1.4 billion extended credit facility. The disbursement of the funds is subjected to an agreement with the country’s creditors to reduce its debt to sustainable levels.

Last Friday (June 17), China urged the International Monetary Fund (IMF) to approve and disburse a US$1.4 billion bailout package for Zambia. “The Chinese side appeals for the IMF’s early approval and disbursement of the ECF [Extended Credit Facility] to Zambia,” said Wu Peng - director-general of the department of African Affairs at China’s foreign ministry- after a courtesy call to the Zambian president  Hakainde Hichilema in Lusaka.

The appeal came just hours after the first meeting of the IMF Common Framework meeting (the official meeting of Zambia’s creditors) to discuss the restructuring of the debt of the country, which defaulted on the repayment of three Eurobonds in late 2020. No restructuring agreement was reached during the meeting.

At the end of the meeting with  Wu Peng, President Hakainde Hichilema thanked China for agreeing to co-chair the IMF Common Framework meeting with France. "Zambia’s debt situation needs to be unlocked so that Zambia’s economy can be opened up," he explained.

“... We agreed to work closely to further strengthen an all-weather relationship… We are delighted that the phone call we had with President Xi, just over two weeks ago, has already begun to bear fruit," he added.

Zambia is struggling with a debt burden that reached 120 percent of its GDP in late 2020. Its external debt exceeded $17 billion at the end of 2021, a third of which was owed to China, according to the Zambian government.

Last April, China agreed to co-chair Zambia's official creditor committee with France. Zambia's finance minister has repeatedly expressed hopes that negotiations would be concluded with the committee by the end of June 2022. However, up to now, an agreement is yet to be met. Also, in December 2021, the country reached an agreement in principle with the IMF for a US$1.4 billion credit facility. However, the funds cannot be disbursed until creditors agree on reducing the debt to sustainable levels.