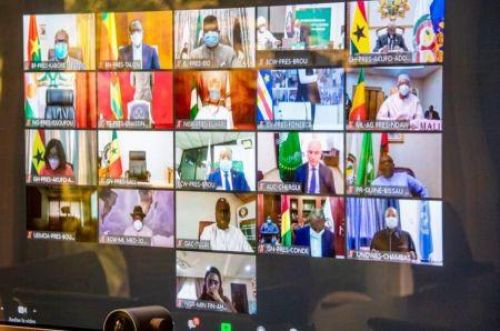 (Ecofin Agency) - On Sunday, January 23, 2021, the member countries of the Economic Community of West African States held their 58th Ordinary Session of the ECOWAS Authority of Heads of State and Government. This virtual meeting saw the establishment of new guidelines regarding the community’s single currency and market.

Concerning the single currency (ECO), the ECOWAS communiqué stressed that the deadline for this project, which has already been postponed several times, will be postponed again, particularly following the impact of the coronavirus pandemic on the macroeconomic performance of West African countries.

A new macroeconomic convergence and stability deal between member countries is expected to be implemented by 1 January 2022. According to Alpha Barry, Burkina Faso's Minister of Foreign Affairs, this new process should lead to a new roadmap for the single currency by 2025.

"Beyond covid-19, we were in a situation where our economies were weak. With the shock of covid-19, the conference suspended the application of the agreement in 2020. The second wave of infections also makes it impossible to deploy the plan in 2021. From January 2022, the convergence pact, which includes the various deficit and inflation criteria to be met, will be implemented. It is estimated that during the three years, the states must make efforts so that in 2025, we can use the common currency," said Lassané Kaboré, Burkinabe Minister of Economy, relayed by Sidwaya.

On the other hand, the Heads of State of the Sub-Regional Organization also discussed the African Continental Free Trade Area (AfCFTA). Initially scheduled to come into force last year, the operationalization of this market that officially came into effect on January 1, 2021, had to be postponed.

Welcoming the accession of several countries in the region to the process of creating this single market, the ECOWAS authorities announced that "common lists of specific tariff concessions and commitments in five priority sectors" have been submitted to the African Union (AU).

In early January, the AfCFTA Secretariat announced that all rules of origin and tariff schedules for the zone should be agreed on by all member countries by the end of June 2021.

“To maximize the profits of the region's participation in the AfCFTA, the conference calls on Member States that have not yet ratified the agreement to accelerate the process of its ratification to promote harmonious trade liberalization in the region and preserve the integrity of the ECOWAS common external tariff," the statement said.