Francophonie: Côte d’Ivoire plans to host the next Entrepreneur gathering in 2022 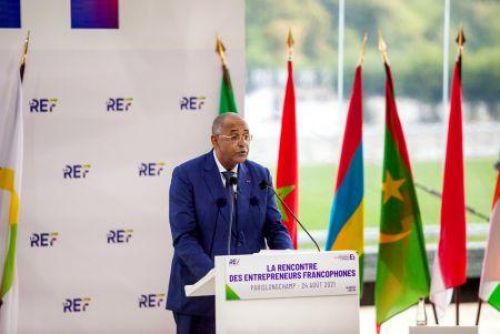 (Ecofin Agency) - Francophone leaders and entrepreneurs have been holding since August 24, in Paris, the first meeting of Francophone entrepreneurs. As discussions continue to reach the common goal, Abidjan is asking to host the next edition.

Abidjan could host the next edition of the Meeting of Francophone Entrepreneurs (REF). Speaking during the first edition, which started on August 24 in Paris, Ivorian Prime Minister Patrick Achi (pictured) said his country is ready to host the next gathering.

"I would like to suggest that this meeting, which is the first of many more, be also held in Francophone Africa. I thus invite you all to Abidjan in 2022 for the next edition of our gathering for a blooming and conquering economic Francophonie,” the Ivorian head of government said.

Abidjan -the most populous city in Francophone West Africa- has become a business hub in the region in recent years. The city has already welcomed many international meetings and the Ivorian government wants to make it one of the main gateways for foreign investment in Africa.

Let’s recall that the meeting of Francophone entrepreneurs is a melting pot to strengthen economic exchanges and investments between countries sharing the French language. The Francophone world is one of the 5 major linguistic geopolitical areas, representing nearly 16% of the population and GDP of the planet. Africa alone concentrates the largest part of the world's Francophone community, and it is estimated that by 2050, 90% of speakers aged 15 to 30 will live on the continent.

The new strategy to develop a more economic Francophonie could attract new investment opportunities for Côte d’Ivoire, but also all the other Francophone countries in Africa. However, many challenges remain to be met to make these opportunities a reality.

Intra-African trade needs improvement. In 2019, the WAEMU zone shipped over 76% of its exports to other continents (46.6% to Europe). That same year, the total volume of goods traded between the WAEMU countries only accounted for a bit more than 13% of the overall trade in the region.

Currently, the main trade partner of this region, which has 7 Francophone members, is China. Since 2016, the Middle Kingdom has been the main exporter of goods to WAEMU with a 16.7% market share in 2019 against 13.5% for France. Paris wants that trend to change.

According to Patrick Achi, only a joint action of the public and private sectors could help boost trade between France and the WAEMU region. ”It is up to us, the governors, to do everything possible so that this meeting is not just another summit. We should always promote this Francophone economic community to boost our successes under a fair institutional framework between the private sector and public authorities […] And it is up to you, Francophone entrepreneurs, to bring this new economic Francophonie to life to make it a space of prosperity and inclusiveness,” he said.