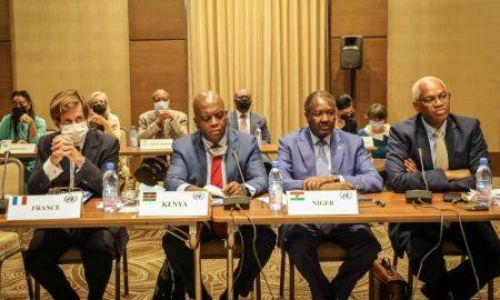 (Ecofin Agency) - The military junta in Mali plans to hold national conferences before the legislative and presidential elections, initially scheduled for February 27 next year, are held. This new decision risks disrupting the well-prepared process, the United Nations fears.

A UN delegation led by Abdou Abarry, Niger's Ambassador to the United Nations, Nicolas de Rivière, his French counterpart, and U.S. Ambassador Linda Thomas-Greenfielda, met with Colonel Assimi Goïta, the Malian President of the Transition, and his Prime Minister Choguel Maïga on October 24 to discuss the upcoming elections.

While the UN Security Council has reaffirmed its desire to ensure that the electoral deadlines are respected, the junta unveiled a plan to hold a "national meeting" before the elections. The junta says this meeting, set for December 21-26, is essential to prepare a national security climate. No campaign could take place in the current insecurity context, the government said, confirming the postponement of elections. This is despite the disagreement of the Economic Community of West African States.

The UN Security Council and ECOWAS fear that the military junta will remain in power without handing it over to the civilians.  "The Malian authorities plan a National Conference on Refoundation as a sort of prerequisite for the elections. They say these meetings could end around December, and it is following this process that an election timetable will be established and submitted to the Malians as well as to the international community," Abdou Abarry, Niger's UN Ambassador, said.

"If we cannot stop this strategy, we however demand that the transition should not be prolonged to the point where Malians no longer have the opportunity to democratically choose their leaders,” he added. In response, Colonel Goïta said: "elections will be held as soon as the conditions are right."

As a reminder, on October 17, an ECOWAS delegation led by Ghanaian President Nana Akufo-Addo visited Bamako to insist that the junta respect its commitments to return to civilian rule.