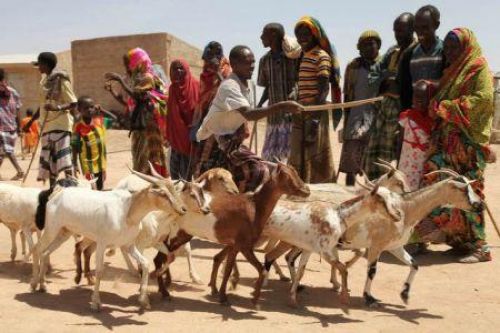 (Ecofin Agency) - Over the past four years, the Horn of Africa has been confronted with severe drought, with disastrous consequences on food security. According to the United Nations, at least 16.7 million people are food insecure in the region.

The Food and Agriculture Organization of the United Nations (FAO) needs 172 million dollars to help the Horn of Africa address the fast-approaching humanitarian disaster. The information was disclosed in a release published, Monday (June 27), by the UN Agency.

According to the FAO, as the disaster is approaching fast, a revised rapid response and mitigation plan has been launched. It is focused mainly on four countries considered drought epicenters in the region. They are namely Djibouti, Ethiopia, Kenya, and Somalia. The plan aims to prevent “deterioration in food security conditions in the region, saving the livelihoods and therefore the lives of almost five million rural people across the four countries” by December 2022.

In a previous appeal, the FAO indicated that US$219 million was needed to address the crisis. Up to the release publication time, it was able to raise US$47 million. The funds raised can help provide life-saving assistance to 700,000 people, but, there is still a US$172 million funding gap to support millions of people.

“Business as usual is no longer an option. It’s time to properly invest in more efficient and forward-looking assistance. This must be linked to long-term development assistance,” said Rein Paulsen, Director of the FAO Office of Emergencies and Resilience.

Let’s note that earlier this month the World Food Programme (WFP) announced a US$385 million program to strengthen groundwater development in at least three of the four countries targeted by the FAO revised mitigation program. On Monday, June 13, the U.S. Agency for International Development (USAID) also announced a US$105 million package to help the region address the impacts of drought.