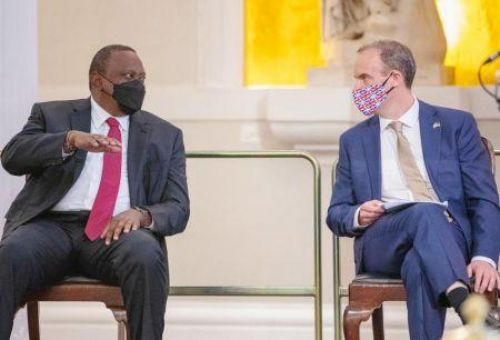 (Ecofin Agency) - After the 2020 trade agreement, London and Nairobi want to strengthen their private investments. On a three-day visit to the United Kingdom, President Uhuru Kenyatta validated the launch of the new Nairobi International Financial Center and secured a new investment of £132 million.

The new investment will target key sectors such as industry and energy. It will build 10,000 sustainable, affordable homes and attract $39 million in private investment in Kenya's manufacturing industry through the UK's Manufacturing Africa initiative. The resources will also fund the expansion of off-grid solar power in western Kenya to provide 6,000 Kenyan households with access to clean energy. This is in addition to investments to support Kenya's transition to green energy, and the development of electric car production.

In recent months, following the United Kingdom's exit from the European Union, London has gradually strengthened its relations with several African countries, particularly in the East. The Kingdom intends to make Kenya its gateway to other nations. To this end, a historic trade agreement was signed on December 8, 2020, followed in January 2021 by a defense agreement.

"This £132 million package of new UK-Kenya deals from the UK government and British firms will support investment in the region, including building new green affordable homes, connecting households to clean energy, and boosting manufacturing,” said Minister Dominic Raab. “This package of investments will create new jobs and unlock new opportunities for the UK and Kenyan businesses by strengthening the relationship between Nairobi and the City of London,” he said.