ITC partners with the Netherlands to boost trade in Africa 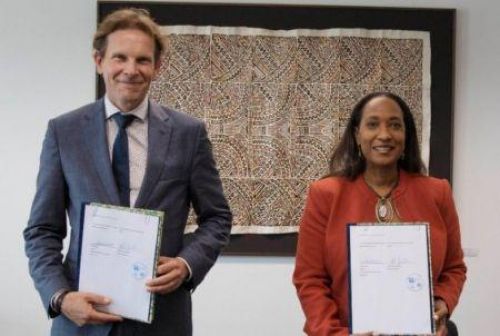 (Ecofin Agency) - The Netherlands and the International Trade Centre (ITC) signed today a partnership agreement called the Netherlands Trust Fund V (NTF V). In an official statement, the ITC said the deal will support innovative projects developed on the continent to enhance trade competitiveness and agro-industrial services for better positioning of African companies on international markets.

The partnership will be implemented over four years and will ultimately strengthen the continent's trade performance, generate better incomes and reduce poverty. “The pandemic has shown us the importance of digitalization, and the resilience of global and local value chains. With NTF V, we will be able to increase our focus on using innovative digital solutions to make value chains more resilient and to support small businesses operating within these value chains,” said Pamela Coke-Hamilton ITC Executive Director.

For Steven Collet, Director of Sustainable Economic Development at the Dutch Ministry of Foreign Affairs, the renewed relationship between the two partners reflects the quality of the actions undertaken for over 15 years. “In the next phase of our partnership, we need to up our game and enhance the competitiveness of SMEs in African countries, focusing on digital technology and agribusiness services and the link between the two,” he said.

As a reminder, the NTF V initiative follows the NTF IV program (2017-2021) funded by the Netherlands; which has achieved significant results, supporting more than 8,000 jobs in beneficiary companies. In addition, more than $60 million in revenue was generated in Guinea, Liberia, Senegal, Sierra Leone, and Uganda; 1,200 business linkages were created, and more than 1,600 SMEs and entrepreneurs were able to improve their competitiveness.

Under the new initiative, the Netherlands will provide $15 million to target "thousands of small businesses and tens of thousands of jobs, creating entrepreneurial opportunities for women, youth and poor communities.”