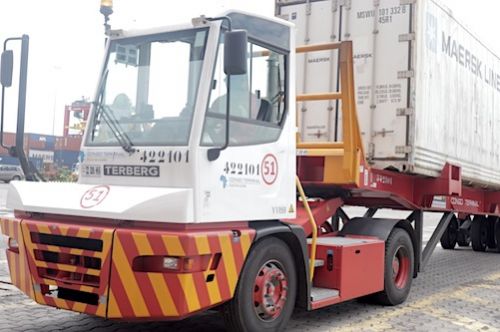 ( BOLLORE) - Congo Terminal, a subsidiary of Bolloré Ports, has recently commissioned 10 tractors and 10 trailers worth more than 779 million CFA francs (over €1 million). This is the fourth order for rolling stock since the concession began in 2009.

These latest generation YT193 and RT223 tractors, equipped with mobile terminals and connected to the Navis 4 operating system, will increase operational production rates at the container yard and enhance the terminal’s productivity.

This acquisition is in line with the investment plan put in place by Congo Terminal, which has to date invested more than 250 billion CFA francs (€400 million) to upgrade infrastructure and equipment at the container terminal.

"The investments made in the Port of Pointe-Noire have enabled us to increase our volumes and improve our production rates. We are continuing to invest in new equipment to keep up with the ever- increasing volumes we are now facing," explains Anthony Samzun, Managing Director of Congo Terminal.

Congo Terminal, a Bolloré Ports concession, is the operator of the container terminal at Pointe-Noire. The company is involved in a public-private partnership that enables it to meet the requirements of its customer base of shipowners, importers and exporters. Thanks to its numerous investments, Congo Terminal helps improve purchasing power and actively contributes to the fight against the high cost of living. With ISO 9001:2015, ISPS (safety) and Pedestrian Free Yard (HSE) certification, the company benefits from leading-edge technology and equipment, such as the Navis 4 terminal operating system, and from the extensive port expertise of the Bolloré Ports network. Congo Terminal employs nearly 900 Congolese employees and leads solidarity initiatives in favour of young people, environmental protection and education. www.congo-terminal.net