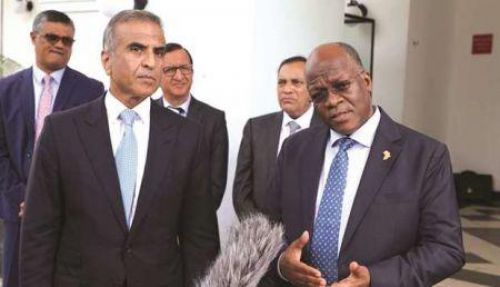 (Ecofin Agency) - On January 11, 2019, Tanzania’s presidency announced that it reached an agreement with Indian telecom group Bharti Airtel for the increase of its share in Airtel Tanzania.

The announcement was made after discussions in Dar es Salaam between president John Magufuli (photo, at the right) and Bharti Airtel’s president Sunil Mittal (photo, at the left), to resolve the dispute that sparked in 2017 between the two shareholders on the ownership of Tanzania’s mobile telephony operator.

The agreement was signed by Tanzania’s minister of constitution and legal affairs Palamagamba Kabudi and Bharti Airtel’s president Sunil Mittal, in the presence of Tanzania’s president John Magufuli.

Sunil Mittal said: "we have in principle agreed to move forward with a new arrangement of shareholding of 51:49 — where Airtel will now drop from 60 per cent to 51 per cent and the people of Tanzania through the ownership of the government of Tanzania will own 49 per cent…Such negotiations do take some time. We are glad that we have come to a point where we will be making some final decisions”.

Apart from the agreement on the shareholding, Bharti Airtel also agreed to pay Tsh10 billion (about  4,349,742 US dollars) as dividends that were not paid for ten years.

“It’s great that they have agreed to give dividends to the government, which for 8 to 10 years we had not received. The percentage of dividends is still under discussion,” the president said.