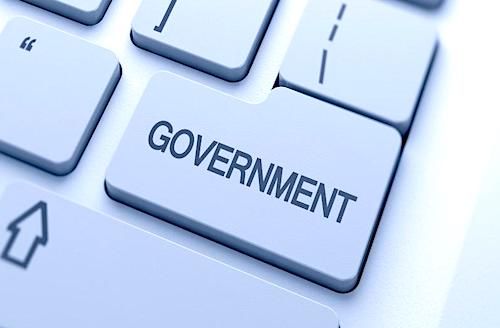 The importance of digital government

The use of Information and Communication Technology (ICT) services can help governments fulfil their roles in a more efficient and effective manner. In a globalized world with rapid technological development, governments need to make sure they can cater to the fast-evolving expectations and needs of their citizens. To do this, most governments have actively started to fully digitise their systems and processes. Digital government implies that governments use digital technologies to innovate, design, operate and deliver their services. It enables them to improve performance of their services as well as reduce costs and to tackle some of their current challenges (such as climate, health, and education). Priorities will vary by country.

The history of digital government goes back to the 2000s with what was called “e-government” or “e-gov”, which referred to the use of ICT services to improve government’s efficiency, accessibility and accountability. The different stages of e-government (while named in various manners in the literature) included publishing the government information online, making government services available online, engaging citizens in interaction with policymakers and allowing citizens to conduct transactions online. The concept of e-government has now evolved and extended to the use of digital technologies for public governance development and to increase citizen welfare. Digital government focuses on improving the public policy formulation, systems and processes of the government, by instrumenting data inputs using the latest technologies.

International organizations have recognized the benefits of digital government. They have published guidelines and created performance indicators such as the Digital Government Framework of the OECD, the E-Government Development Index as well as the E-Participation Index of the United Nations, and the Digital Adoption Index of the World Bank.

What digital government may bring to African countries

In the 21st Century, the strongest growth in Internet penetration has been in Africa – this has increased by a quarter between 2005 and 2018i; with the majority of growth driven by mobile broadband penetration (38% in 2017 and 87% by 2025). ICT is crucial for long-term economic development of Africa: in 2017, mobile technologies generated 7.1% of the GDP in Sub-Saharan Africaii. Furthermore, ICT holds significant potential for greater inclusion, social cohesion and environmental sustainability of Africa. This is also reflected in the rising entrepreneurship across the African continent, underpinned by the rising technological inventions.

Therefore, in order to support the rising digital revolution, African governments need to become active members of the digitisation process. This will enable them to respond most effectively to the needs of the fast-digitising businesses and citizens. Below are some specific benefits that digital government would bring to African States (Error: Reference source not found). 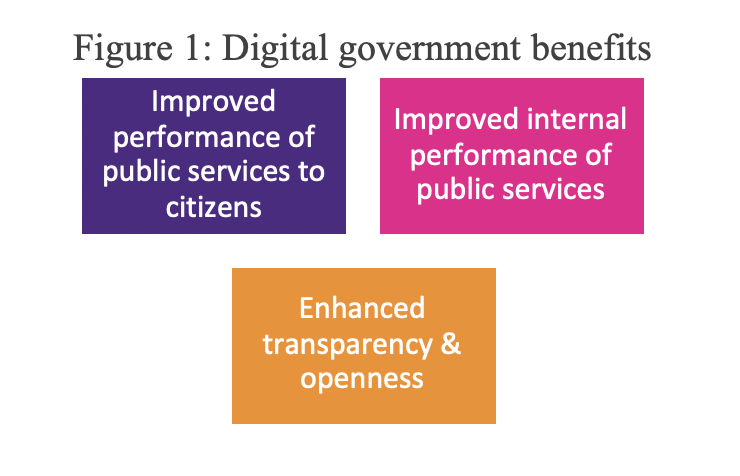 These are explored in the rest of this paper.

Perhaps the most visible impact of digital transformation is in improving the performance of public services to citizens. ICT helps to reduce the administrative burden and makes the delivery process more efficient, by providing instant access to services for people in remote and hard-to-reach areas, saving time and operating costs; according to the UK government’s 2012 Digital Efficiency report, digital transactions were 50 times cheaper than in-person ones.

A panel data analysis conducted between 1995-2015iii shows that ICT has a positive and statistically significant effect on public sector management in Africa. Improved access to information is an important step towards a more open and transparent government that can strengthen public trust in government institutions. In fact, users of e-government services have better perceived power relationship with the government.iv 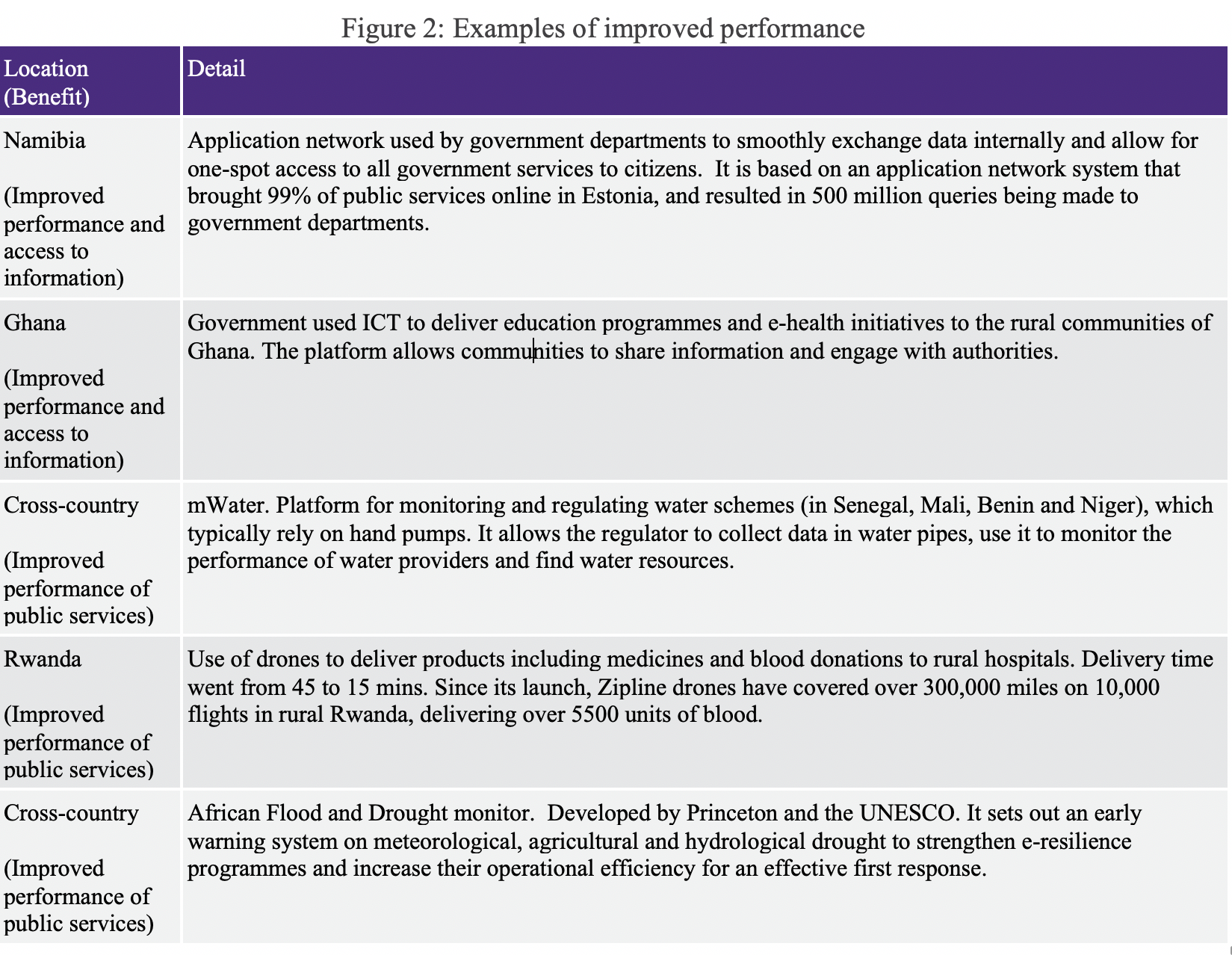 Transparent and open government systems may contribute to reduce corruption and make governments more accountable to their citizens. Elbahnasawyv found that e-government and internet adoption was a powerful tool to curbing corruption. 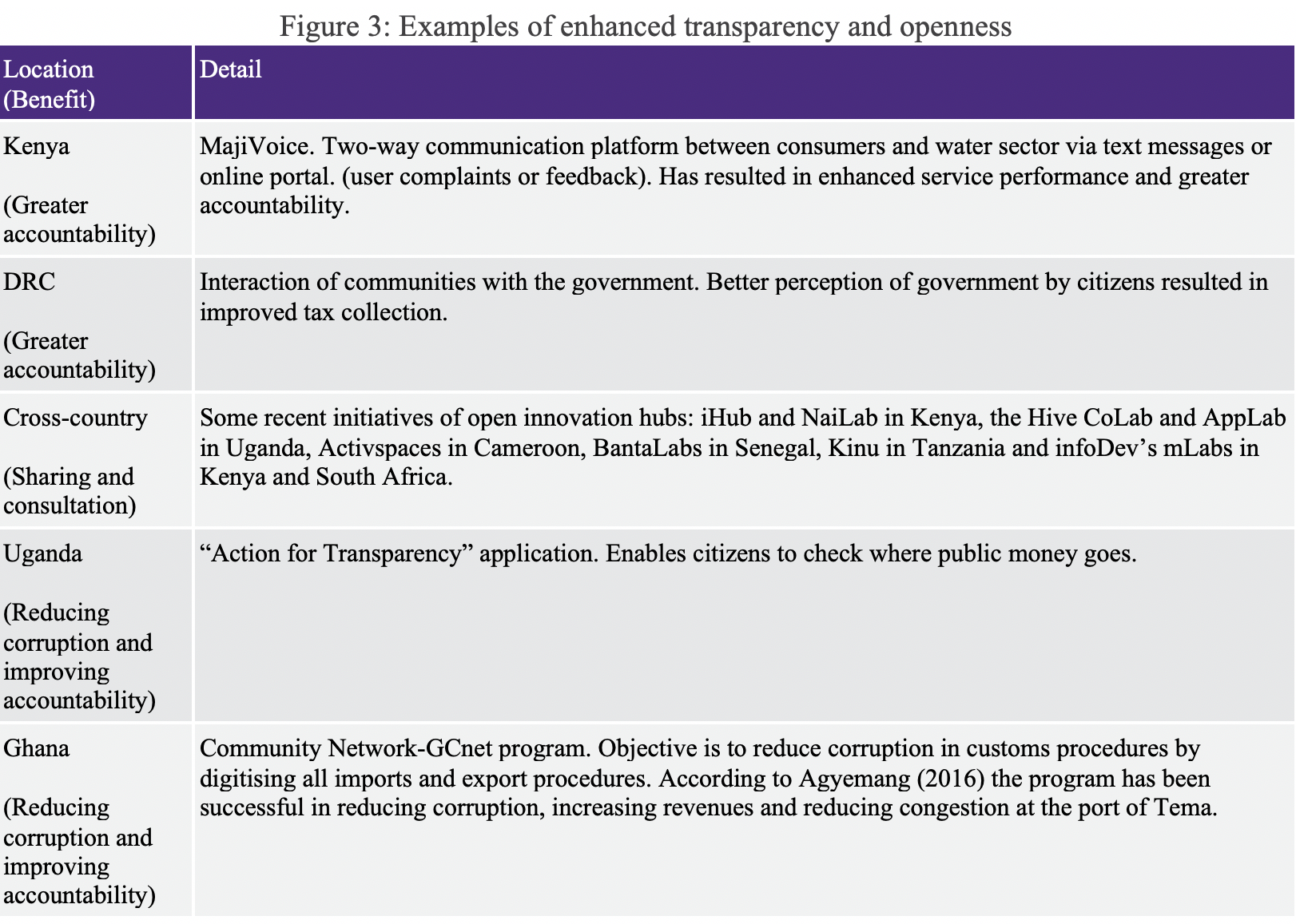 Digital government has had limited success in Africa

Digital government initiatives have had a limited success in African countries so far (35% of attempts resulting in a total failurevi). For example, a land licensing information system which was an e-government effort in South Africa was abandoned, because it created conflicts with the interests of the groups in power. As a result, the programme could not be sustained and was never used. Such projects have faced some barriers to their own implementation; and for those implemented, there might be a lack of sustainability and inclusivity. Furthermore, they have also fostered existing inequalities, like digital divide and freedom for information.

First, digital government may face barriers to implementation in developing countries for a number of reasons.

Political reasons. Stability and predictability of the policy environment is extremely crucial to implement digital government, given the bidirectional causality between ICT services and public sector management.

Technical reasons. Despite the desire from many developing countries to implement a digital government system, it is often the case that they do not possess the necessary infrastructure to make use of the relevant services that would be provided. Moreover, privacy and security are relevant issues when it comes to digital government. However, cybersecurity regulation in developing countries is still nascent with low capabilities to implement effective cybersecurity countermeasures.

Financial reasons. Digital government services tend to be costly to implement and require high short-term investment with low immediate savings. Therefore, investing in digital government might not be a priority for developing countries, especially in the light of impending issues like poor education and health systems, improper sanitation, unstable law and order situation.

Resistance. Employees of the public sector might resist to this change fearing that it would reduce their control and power. Adapting to new ways of working can be slow. Also, it is a norm in many countries to do business in person as opposed to using distant services, which does not provide optimal conditions for implementing e-government schemes. The same applies for the lack of trust in digital tools.

Second, even when projects have managed to be implemented, digital government may lack sustainability in developing countries because of design-reality gaps (differences between the current reality and the design of the future e-government systemvii. Three types have been identified:

Finally, digital government may even be a driver for inequalities. It may enhance existing digital divides – the gap between those who have access to the internet and those who do not. Besides technical access, gaps may exist in affordability (rich and poor), age (young and old), areas of living (urban and rural), or digital skills (literacy and illiteracy). Naturally, those suffering from these gaps will not be able to reap the benefits of digital government systems, which include an array of economic opportunities.

Digital government may also enhance information asymmetry. Academic literature highlights that, when new ICTs are introduced as part of digital government schemes in developing countries, the standard of record management deteriorates, restricting citizen’s freedom to information. For example, in India, in 2014, government officials were unable to respond to a request for information since they had deleted about 11,000 files, while transferring the data to an electronic system.

Given the analysis above, there are some clear lessons on how to improve inclusivity and sustainability of digital government projects. Firstly, to enable inclusivity, governments should:

To improve sustainability, governments should focus on:

Data, AI and open access: the next step forward.

With the technological progress and its increased diffusion and acceptability into the public sector, governments of developed economies are evolving towards more integrated approaches of ICT use.viii The digital government initiatives described below are mostly restricted to developed countries, but some of their benefits may apply to African countries in a near future.

Spotting current and future patterns through data analytics and predictive analytics. With the ability to combine data from multiple sources, including public data, commercial data and citizen input data, governments can enhance public value creation and move towards a more proactive approach of data and information release. The French employment public agency, Pole Emploi, uses data analytics to detect any potential fraud and incoherence between the information provided by individual job seekers and employers.

The increased access to data will allow governments to have a granular understanding of the changing needs of the citizens, resulting in:

Making better coordinated and informed decisions. Digital government would increase the spread and easy access to open Application Program Interfaces (APIs). For instance, an intra-region integration of the public cloud infrastructure is happening in Australia, New Zealand and Japan. Furthermore, electronic identification and trust services (e-IDAS) is being implemented in EU which will establish new e-relations across borders for EU citizens.

Also, with the fast development of artificial intelligence, machine and deep learning, systems can now build associations, learn from experience and draw conclusions. Therefore, it is possible that future digital government could optimize their decisions by using systems that automatically propose them effective policies and avoid wasteful programs.

It is clear from all the above-mentioned cases that digital government have immense benefits – current ones as well as potential future ones – for the functioning of African government.

Developing countries can better reap the benefits of digital governments by implementing more inclusive and sustainable projects. This is based on bridging the different digital divides (access and skills), the gap in regulatory frameworks, warding off the lack of market competition and the absence of accountable institutions. Plum may support them in assessing the economic and financial benefits of such projects’ implementation.

By concentrating on optimising current systems, developing countries will be well placed to take advantage of the next stage of digital government, using data and AI to improve services.

We are a leading independent consulting firm, focused on the telecommunications, media, technology, and adjacent sectors. We apply extensive industry knowledge, consulting experience, and rigorous analysis to address challenges and opportunities across regulatory, radio spectrum, economic, commercial, and technology domains.

Based in London and Paris, we are proven and experienced in delivering to diverse needs and approaches globally, including for governments, regulators, service providers, vendors, professional investors, and legal firms.