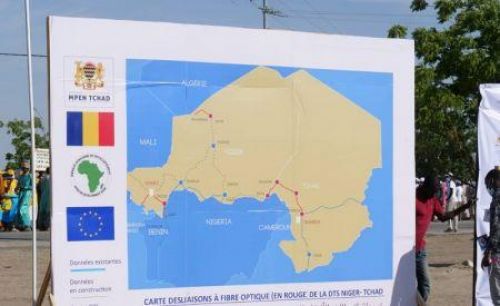 (Ecofin Agency) - On November 24, 2020, in Massakory, Hadjer province, the President of the Republic of Chad, Idriss Deby, launched the country's optical fiber interconnection works in Niger. The project, which will be carried out in over four years, will cross the towns of Massaguet, Massakory, Mao, Rig-Rig, Daboua, up to the border with Niger.

The 503 km broadband cable is a part of the 1,510 km Trans-Saharan optical fiber cable that originates from Algeria. The Chadian component will cost €28.7 million, including a state contribution of €2.4 million.

In addition to improving Internet services for the populations, the optical fiber section will be accompanied by pilot data centers, e-government platforms, an integrated population data management system, and incubators that will strengthen the digital development of local populations.

Idriss Saleh Bachar, Minister of Posts and Digital Economy said this new investment is another step toward reducing the country’s digital divide.