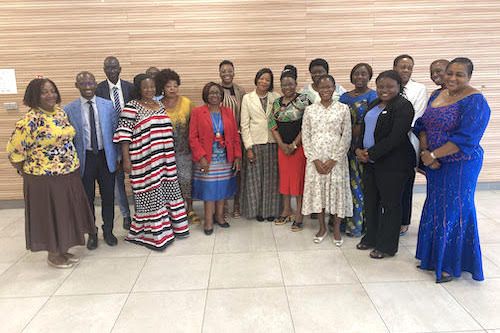 (AfDB) - The African Development Bank's Director General for Central Africa, Serge N'Guessan, led a delegation for a series of talks with stakeholders in the Cameroonian private sector, including women entrepreneurs, between 24 and 30 September 2022 in Douala.

"It was a very good opportunity because these meetings enabled us to witness the obstacles which exist between the banks and us, women entrepreneurs," said Michèle Kepeden Lewat, General Manager of Business Trade Cameroon SARL. The trading company specializes in the distribution of personal protective gear to industrialists and other workplace safety solutions, including gas detection and analysis, fire protection, lifting and handling, valves and fittings, and actuators.

"Beyond guarantees, which are a major constraint on women entrepreneurs, there is a problem of securing funds and keeping financial statements, which does not allow financial institutions like ours to properly assess the solvency of women entrepreneurs who approach us for a loan," said Pierre Conrad Edzoa, CEO of PRO-PME Financement S.A.

For the Ecobank representative, Cameroon's emergence depends on women. The bank has launched a program called Ellevate, which helps women entrepreneurs transition from the informal to the formal economy by offering them specific loans depending on the type of business and the guaranteed conditions.

“Before the guarantee, there is flexible pricing," said Guy Martin Mbah, Head of small and medium-sized enterprises and Head of the network of branches at Ecobank Cameroon. He said, the ordinary loan is normally made on an interest basis of 10%, but women entrepreneurs benefit from a bonus. For the application fee, which is usually 1% of the total loan amount, women pay only 0.5%.

"We came to facilitate dialogue between women entrepreneurs and financial institutions. But we are very happy to see that this dialogue already exists, though it is still low-key," said Charleine Mbuyi-Lusamba, Gender Officer at the African Development Bank. She added that: "The discussions of the past few days have enabled us to embark on the path to a flexible and frank dialogue, capable of creating a real economic dynamic in Douala and in Cameroon.” She also announced that a high-level AFAWA mission, headed by Esther Marieme Dassanou, AFAWA's head, will soon visit Cameroon to strengthen ongoing initiatives.

"We sincerely thank AFAWA because its action effectively targets our needs. We are going to organize ourselves more and equip women entrepreneurs, so that they can be up to the job that AFAWA will bring later on," said Alice Maguedjio, President of the Retailers Union of the Wouri Division, where the capital Douala is.

In Cameroon, AFAWA is a partner of three financial institutions through the African Guarantee Fund.