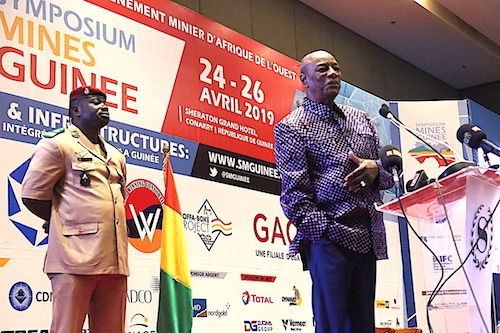 (SMB-Winning) - The SMB-Winning Consortium has entered into a high-level partnership with the 2019 edition of the Guinea Mines Symposium (SMG 2019), the main mining industry event in the country held annually for the past 6 years. Each year, the SMG takes on a new dimension and succeeds in attracting the best professionals and experts from the mining sector, from all over the world, to debate and exchange on the major issues facing this sector, which is essential for the Guinean economy.

The increasing visibility of the Symposium attests that Guinea has found its place in global value chains. This is particularly true in bauxite, an area in which the SMB-Winning Consortium has become particularly important, producing 36 million tons in 2018. This performance, which places Guinea in the top three bauxite-producing countries, would not have been possible without the contribution of all stakeholders.

The SMB-Winning Consortium now intends to move beyond bauxite mining and export by laying the foundation for local processing to create long-term value. This is why the Consortium has begun the second phase of its Guinean history, that of industrialization, in the Boké region. This concerns the transformation of bauxite into alumina, but also the construction of infrastructure.

The SMB-Winning Consortium will spend $3 billion in the coming years to develop a 135-km railway line and an alumina refinery. This investment is in addition to the $1 billion already invested for the construction of the port terminals of Dapilon and Katougouma. All these investments are accompanied by a policy of economic inclusion with the populations impacted by the Consortium’s activity.

The Consortium also aims to make its project a catalyst for the inclusive development of agro-industry through the implementation of an economic growth corridor along its railway line. Already, agricultural projects have been launched thanks to the involvement of its teams with local populations.

Mr. Frédéric Bouzigues, Chief Executive Officer of Société Minière de Boké commented: “On behalf of the 9,000 employees of the SMB-Winning Consortium, I would like to thank the organizers of this event, which promises exciting debates, with a shared horizon of developing the Guinean mining industry, while respecting and benefiting all stakeholders, primarily the Guinean population.”

Founded in 2014, the SMB-Winning consortium brings together four global partners in the extraction, production and transport of bauxite: Singapore's Winning Shipping Ltd, a leading Asian shipping company; the Yantai Port Group; UMS, a transport and logistics company with more than 20 years' experience in Guinea; and Shandong Weiqiao, a leading Chinese aluminum producer. The Republic of Guinea is a 10% shareholder.

Since its inception, SMB-Winning has invested more than US$1 billion in its extractive activities in the Boké region. The consortium, which directly employs more than 9,000 people, has also built and manages two river ports. For more information, visit smb-guinee.com