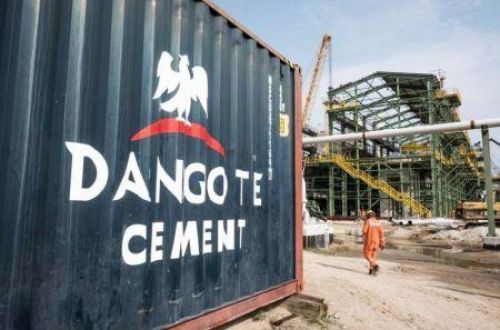 (Ecofin Agency) - Despite the coronavirus pandemic, Dangote Cement Plc recorded an outstanding performance. Indeed, on March 23, 2021, the cement group posted a turnover, which crossed the N1 trillion mark for the first time, up by 16% year-on-year to N1,034.2 billion (over $2.7 billion).

A year of firsts

According to the group, this surge in turnover was mainly driven by strong demand for cement throughout the 2020 fiscal year. Over the period, the group increased its production capacity by 3 million tons in Nigeria, where it realized a significant portion of its turnover. Indeed, during the said fiscal year, the group’s cement sales in Nigeria were up by 12.9% year-on-year to 15.9 million tons, bringing Dangote Cement Plc’s global sales to 25.7 million tons (up by 8.6% YoY).

The other African subsidiaries also contributed to the growth in turnover. But their growth was just +4.4%, to 10 million tons, comforting Nigeria’s position as the group’s main market.

‘Profitability was further bolstered by our disciplined cost control measures in what we believed to have been a highly inflationary and volatile year. These measures resulted in a 37.7% increase in profit after tax to N276.1B. I am delighted to report that Dangote Cement experienced its strongest year in terms of EBITDA and strongest year in terms of volumes. Despite a challenging environment, Group volumes for the year were up 8.6% and Group EBITDA was up 20.9%, at a 46.2% margin,’ the CEO added.

Indeed, in a challenging environment marked by the coronavirus crisis and the additional costs that businesses have had to bear, Dangote Cement Plc was able to contain its costs. Its Gross operating income (EBITDA) improved by 20.9% to N478 billion ($1.25 billion), representing 46.2% of its turnover.

The only downside to an exceptional year was that Dangote Cement's net debt increased by half to N337.3 billion ($885 million), deteriorating its net debt to EBITDA ratio. In its presentation of key indicators to investors, the cement company attributed this increase to its successful first bond issue in April 2020 (N100 billion raised) and its commercial paper issue, the largest such issue in the Nigerian debt market.

Nigerian business tycoon Aliko Dangote, long criticized in Nigeria for not paying enough taxes despite his profits, due to his pioneer status - a tax vacation on paying corporate tax - has deferred a tax charge of N97 billion ($254 million) for his group in 2020. This is twice the amount that appeared in its accounts in 2019.

According to the company's accounts, N21 billion of the N97 billion tax liability for the 2020 fiscal year was paid during the said year while in 2019,  N4.6 billion was paid out of the N49 billion tax liability. Dangote benefits strongly from the tax credit system in place in Nigeria, which offsets its tax payments. In 2018, the group had obtained a tax credit of N89.5 billion.

Fact is, Dangote Cement Plc is highly favored by the Nigerian tax credit scheme that compensates its tax payments. In 2018 for instance, the group obtained tax credits estimated at N89.5 billion.