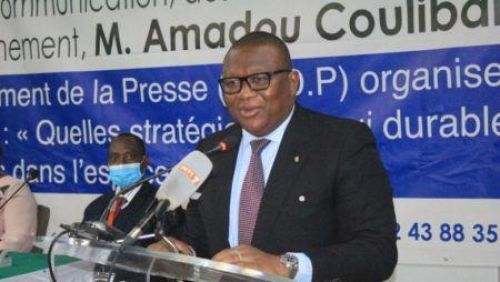 (Ecofin Agency) - The media industry in many African countries has long suffered from a lack of support from authorities. To break this trend, the Ivorian government has invested more than CFA10 billion ($17.3 million) over the past decade to support private media.

Amadou Coulibaly, Ivorian Minister of Communication, Media and Francophonie, announced last November 29 the introduction of a parafiscal tax on advertising in the country. This was during the International Symposium on Public Aid to the Media organized by the Fund for the Development of the Press (FSDP) of Côte d'Ivoire.

"We need to collect a levy on advertising to support the development of the media sector,” the official said, adding that it was not normal that "some international media companies that operate the Ivorian market do not pay tax”. The new parafiscal tax aligns with the government’s ambition to increase public support to the media industry in general and the private media sector in particular.

Beyond Côte d'Ivoire, the participants of this International Symposium discussed opportunities to improve public aid to private media in the ECOWAS. A network of organizations managing funding and aid to the media was created in that regard in Abidjan. It will be led by the Burkinabe Ibrahim Mohamed, who heads the Support Fund for the private press in his country.