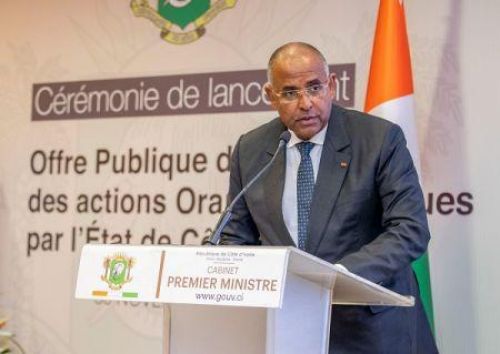 (Ecofin Agency) - During a ministerial council last August, the Ivorian government decided to launch a public tender process to sell part of its 14.95% stake in Orange CI. The operation was launched on November 30, 2022. In the end, the state will retain only a 5% stake and a seat on the board of directors.

Côte d'Ivoire launched the public offering of part of its Orange CI stakes yesterday, November 30. The sale was launched during a ceremony organized at the Prime Minister’s office.

Specifically, the country will offer 9.95% of the 14.95% stake it has in Orange CI on the BRVM, the regional stock exchange. Overall, 14,990,207 shares divided into two categories will be offered. The first share category is for Orange CI-eligible staff. In that category, 750,000 shares are offered at XOF7,600 per share. The second category is for legal and natural persons excluding the staff eligible for the first-category offer. The number of shares offered in that category is  14,240,207 at XOF9,500 per share.

Ultimately, Côte d’Ivoire expects XOF140.9 billion ( US$222 million) from the operation.  It aims to boost public revenues while at the same time encouraging the public to invest in the stock exchange, therefore contributing to the development of the regional exchange and the local economy.

The public offering "that we launched is historic in more than one way. First, Orange CI is one of the most important assets the state has in a private company. Then, the operation is the largest privatization bid taken in our country. [...] It is also the 26th privatization operation on the BRVM but by far the most important,”  said Prime Minister Patrick Achi (photo).

According to Ivorian authorities, the operation would increase the BRVM’s market capitalization by 25%. With Orange CI listed, the exchange will have 46 listed companies, including 35 Ivorian firms.  "Orange CI is a safe and future-proof investment in a key telecom operator that operates in an economy that is the powerhouse of the sub-region and the African continent as a whole. The Ivorian economy is watched from all over the world for the pace of its growth, the extent of its reforms, and the utmost quality of its prospects,” the Prime Minister added during the launch of the public offering.