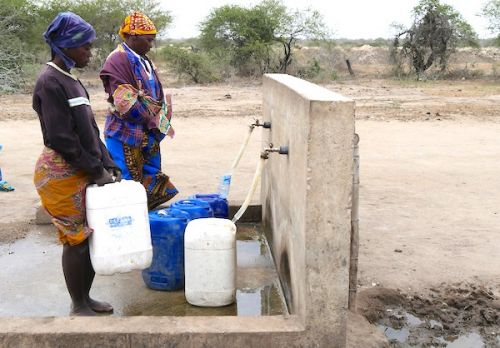 (AFRICAN DEVELOPMENT BANK) - Felicidade Machava, 60, likes to recount the story about how, one year, she filled a small truck with maize from her harvest.

Machava, is a farmer in Guija district in Mozambique. The country has been experiencing weather volatility in the form of longer and more frequent cyclones and droughts. Extreme climate events affect the agriculture sector, a source of employment for 70% of Mozambicans, by hampering productivity, straining subsistence output, and reducing opportunities along the agricultural value chain.

With funding from the African Development Bank, Climate Investment Funds and the Mozambican government, the project provided irrigation kits, constructed boreholes, small dams and water troughs that increased access to water for people and cattle and also helped boost farmers’ yields to the benefit of nearly 60,000 people. The project covered five districts in the country’s drought-prone Gaza province.

Machava is a member of Green Revolution, a farmers’ association  that participated in the Sustainable Land and Water Resources Management Project (SLWRMP). The 20 members of Green Revolution farmers’ association in Guija, 12 of whom are women, rotated 12 irrigation kits among themselves so that each day three farmers had the use of them on small plots.

The project also provided a pumping system for the collective’s farmers to use. It was expensive to run – fuel costs run as high as $15 a day – but members’ fees contributed to covering it.  With advisory support from a government official in their district, the farmers generated a financial surplus by selling green beans, maize, pumpkin, kale, onion and green pepper in the local market.

According  to Machava, “In 2017, I was able to focus strongly on the production of green beans, which allowed me to buy an additional plot of land for approximately $83 and start to build a new home – which I hope to complete with the earnings of the next agricultural season.”

For farmer Rute Bila, the project has allowed her to access a reliable source of water from a river near her farmland. Bila has increased production from her fields and is now able to pay school fees for her nephews. Speaking of her business plans, she says, “I bought a goat, which I paid approximately $38 for, and I hope to expand into a flock of goats that I can sell.”

She’s not the only one. “My goal is to someday supply to the big manufacturing companies in the area,” said Guezanes Maluleque, a 53-year-old farmer in the village of Mapai Rio. He heads up two households but finds it advantageous to pay four laborers to work some of his 30 hectares, freeing up members of his family to cultivate their own plots of land.

Under SLWRMP, Maluleque received 150 cashew and 60 mango trees and in his first crop produced 50 kilos that he was able to sell to a traveling salesman for $1 a kilo.

The project distributed a total of56 irrigation kits across the five participating districts, which directly benefitted 3,600 people, more than 80% of them women. The target beneficiaries of the irrigation kits were trained in how to use them properly.

With the nearest river at least 20 km away for many of the farmers, the project also built 21 small earth dams to water cattle and to meet villagers’ needs. Three more dams were built than had been originally planned for, more than doubling to almost 30,000 the number of people who gained improved access to water. More than 50,000 head of cattle are watered at these dams, over three times the number the dams were expected to serve.

According to analysis by the World Bank Development Impact Evaluation Research Group of the seven-year project, irrigation kits increased farmers’ productivity threefold. And the knock-on benefits extend beyond livelihoods. “I’ve had a change in nutrition as now I am able to produce vegetables such as lettuce and onions,” said Alberto Mutasse.

Lessons learned from the project mean it can be replicated and scaled up in other districts. Best practice from its implementation has already been incorporated into the Bank’s Drought Recovery & Agriculture Resilience Project . In addition, Mozambique government staffers have been trained in how to roll out and manage climate adaptation strategies.

Total funding for SLWRMP, which wrapped up in December 2019, was an estimated $21.5 million; $4.9 million was provided by the Bank Group’s African Development Fund. Climate Investment Funds extended $15.9 million in financing and the Government of Mozambique $0.5 million.