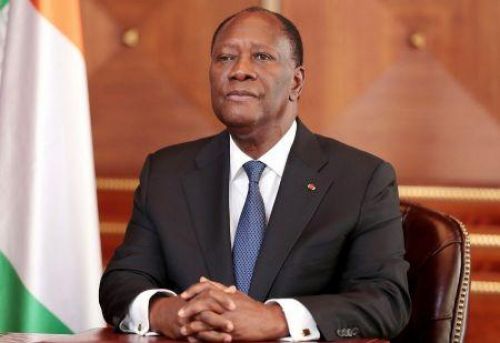 (Ecofin Agency) - Ivorian President Alassane Ouattara (pictured) said he will seek another term, a third one, if people of “his own generation” also run for the elections next year. He said that before tens of thousands of supporters on Saturday during a 4-day visit to the region of Hambol.

“I want my generation to understand our time is up, and we should all step aside. But if they decide to run, I’ll run too,” the 77 year-old said without directly mentioning the people he was reffering to. But considering the actual context in the country, Alassane Ouattara is evidently talking about Henri Konan Bedie and Laurent Gbagbo.

This announcement comes at a time when the leader, who has been in office for 8 years, was unclear for several months about his candidacy for the next presidential election. For many observers, the leader doubts the ability of Prime Minister Amadou Gon Coulibaly, his first choice to succeed him, to win against the opposition coalition that Henri Konan Bédié currently leads.

“Côte d'Ivoire belongs to the next generations. But as I see hesitations in some of my generation, that's why I didn't announce my decision. But don’t worry, my intention is to hand over power to a new generation,” he said.

Next elections are scheduled for October 2020, nine years after the post-electoral crisis that marked President Ouattara's arrival in power. For the time being, only Guillaume Soro, a former close relative of Alassane Ouattara, has openly declared his intention to run for the 2020 presidential election.