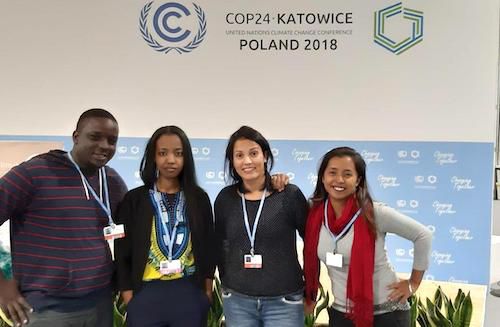 (AFRICAN DEVELOPMENT BANK) - This week in Poland, more than 20,000 delegates from 196 countries are participating in COP24, considered to be the most important climate conference, held this year in Katowice, heart of the coal industry in the country as well as Europe's worst air quality city mostly due to its continued reliance on coal for fuel.

Ready to welcome the public, the African Development Bank has opened its Pavilion at COP24 and launched its 2-week program with an exciting event: a training workshop on how best to cover the climate negotiations for African journalists present at COP24.

This daily workshop is in line with the Bank's vocation to disseminate knowledge and support capacity building. Participating young Africans represent the generation that will build the future of the continent.

To this end, the Bank is sponsoring four young journalists, men and women from across the continent (Madagascar, Kenya, Sudan and Tunisia), in a partnership with Climate Tracker, an international organization dedicated to training journalists on climate change reporting, particularly in Africa.

Over the next two weeks, these young African journalists will cover the negotiations for national media in their countries. As the most vulnerable region to climate change in the world, Africa needs more experienced journalists in this field.