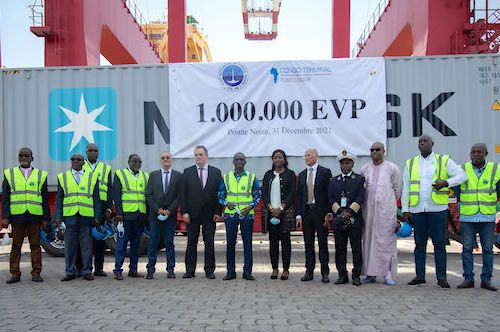 (BOLLORE ) - Congo Terminal, a subsidiary of Bolloré Ports, exceeded the volume of one million shipping containers handled in 2021, having managed 1,003,734 TEUs over the course of the year. This new level of performance reflects efforts Bolloré Ports has made to increase traffic from 200,000 to 1,000,000 TEUs, in line with its commitments made as part of the plan to modernise the Port of Pointe-Noire.

Bolloré Ports has invested more than €400 million since 2009 to upgrade the container terminal’s infrastructure and equipment. These investments have extended docks G and D by 1,500 linear metres and increased their depth to fifteen metres. They have also strengthened the port’s equipment, with 6 new STS cranes and 18 RTG cranes acquired.

Over the past decade, the terminal operator has also carried out construction works, having built storage areas covering more than 32 useable hectares, a multi-modal logistics area of 4.5 hectares connected to the Congo–Ocean Railway, and a technical workshop dedicated to maintenance operations. It also uses the Navis N4 operating system for managing and automating operations in the terminal.

Congo Terminal is an employer that supports local recruitment. It currently employs over 900 Congolese talents and calls on more than 1,500 temporary workers. The company also develops its employees’ skills and is committed to promoting gender equality, especially in technical jobs like STS cranes operators.

Séraphin Bhalat, Director of the Port Autonome of Pointe-Noire, said, "This result attests to the success of the partnership between Congo Terminal and the Port Autonome of Pointe-Noire. Now that we have broken this symbolic level, our goal is to become a transhipment hub helping the national economy and subregion grow and an eco-friendly smart port."

"Beyond operations, we have decided to extend our commitments to involve all stakeholders in an ambitious CSR policy. This can be seen in the Green Terminal label created by Bolloré Ports and approved by Bureau Veritas which aims at supporting the development of eco-friendly port infrastructures," explained Anthony Samzun, Managing Director of Congo Terminal.

Congo Terminal, a Bolloré Ports concession, is the operator of the container terminal at Pointe-Noire. The company is involved in a public-private partnership that enables it to meet the requirements of its customer base of shipowners, importers and exporters. By reducing its tariffs considerably in recent years, Congo Terminal is contributing to the improvement of purchasing power and the fight against the high cost of living. With ISO 9001:2015, ISPS (safety) and Pedestrian Free Yard (HSE) certification, the company benefits from leading-edge technology and equipment and from the extensive port expertise of the Bolloré Ports network. Congo Terminal implements mobility solutions that respect the environment, including electric buses for the transport of employees in the facilities. Congo Terminal employs over 900 Congolese employees and leads solidarity initiatives in favour of young people, environmental protection and education. www.congo-terminal.net