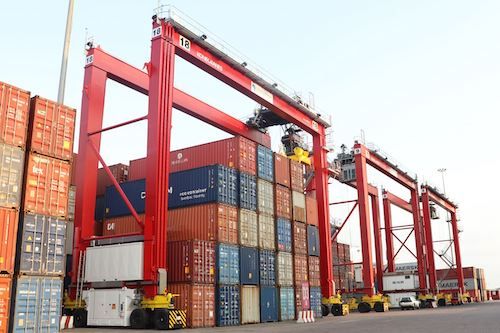 (BOLLORE ) - On 20 April 2022, Congo Terminal, a subsidiary of Bolloré Ports, introduced two new RTG cranes worth €3.8 million (2.5 million CFA francs). The equipment was delivered in March and the company has been able to grow its fleet and currently has 20 RTG cranes.

With a lifting capacity of 40 tonnes, this next-generation equipment will boost delivery rates and reduce the time required to process goods. They are also equipped with a real-time GPS that optimises the management of operations to make imported containers available without delay.

“The introduction of the two new RTG cranes will improve productivity at our container terminal and will help develop our activities in the following year. It also forms part of our ambition to make Point-Noire a transshipment hub and the main marine gateway of Central Africa”, said Anthony Samzun, Managing Director of Congo Terminal.

“Apart from its operational performance, Congo Terminal is also committed to the Green Terminal labelling process that we created over a year ago with the aim of reducing the carbon footprint of our activities. We are supported by Bureau Veritas who approved the methodology and conducts audits every year in order to label our terminals according to established measures in favour of protecting the environment”, said Olivier de Noray, Managing Director of Bolloré Ports and Terminals.

Congo Terminal continues its investment programme in order to make Point-Noire the leading deep- water port and a major platform in transshipment on the West African coast. The company has invested more than 250 billion CFA francs (€400 million) to upgrade the container terminal’s infrastructure and equipment.

Congo Terminal, a Bolloré Ports concession, is the operator of the container terminal at Pointe-Noire. The company is involved in a public-private partnership that enables it to meet the requirements of its customer base of shipowners, importers and exporters. Thanks to its numerous investments, Congo Terminal helps improve purchasing power and actively contributes to the fight against the high cost of living. With ISO 9001:2015, ISPS (safety) and Pedestrian Free Yard (HSE) certification, the company benefits from leading-edge technology and equipment, such as the Navis 4 terminal operating system, and from the extensive port expertise of the Bolloré Ports network. Congo Terminal employs nearly 900 Congolese employees and leads solidarity initiatives in favour of young people, environmental protection and education. www.congo-terminal.net