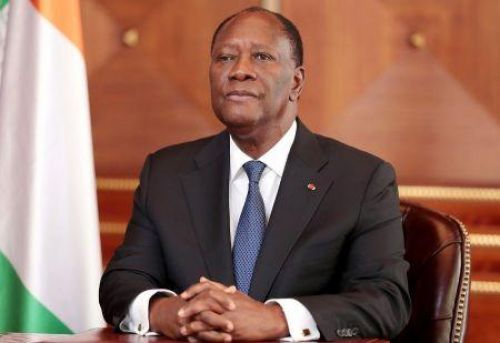 (Ecofin Agency) - Ivorian President Alassane Dramane Ouattara (pictured) expressed his intention to modify the constitution before the end of 2020. The leader said this yesterday Jan 6 when he was presenting his New Year's greetings to the diplomatic corps.

“During the first quarter of this year, I will propose to Parliament to make amendments to the Constitution to make it more coherent,” he said. While he gave no further details, he, however, stressed that this is not a maneuver to keep “anyone” out of the presidential race, scheduled for October 2020.

This announcement comes in a tense political context, as Alassane Ouattara has so far not made it clear whether he is running and the opposition is denouncing maneuvers to sideline his main political rivals. As a reminder, a few months ago, the President said that he would run if his aging peers Henri Kona Bédié and Laurent Gbagbo, recently acquitted by the International Criminal Court, also ran but he also said he wanted to make room for the “younger generation.”

At the end of December 2019, Guillaume Soro, a former close friend of the government and the only major rival to have officially announced his candidacy, denounced a plot by the head of state to sideline him from the presidential race, after the Ivorian justice issued an international arrest warrant against him.

According to the Head of State, “all the conditions are now in place for the upcoming presidential election to be fair, transparent, open and peaceful.” A meeting is expected to be held in January with the political parties and civil society to finalize the work on the electoral code, at a time when the reform of the Independent Electoral Commission, which is due to lead the presidential election, is strongly criticized by the opposition.