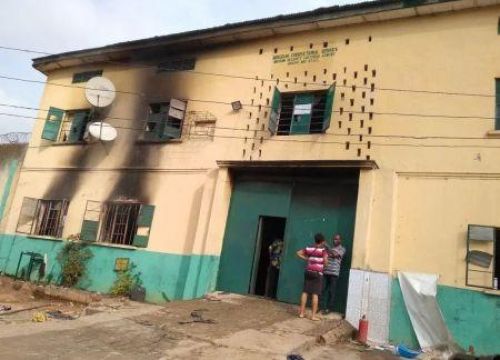 (Ecofin Agency) - More than 1,800 inmates escaped from the Owerri prison in southwest Nigeria during the night of 4 to 5 April 2021, after a group of armed men attacked the premises. The information was reported by the Nigerian Correctional Service.

Authorities said the attacks began around 2 a.m. and lasted for about two hours. Other police and military buildings were also assaulted.

The attack took place in Imo State, which is known for having been part of the former secessionist Republic of Biafra, a state that the IPOB (The Indigenous People of Biafra) independence movement is trying to recreate. The IPOB has denied being behind the attack through its spokesperson, Emma Powerful.

In October 2020, during the END SARS protests that turned into riots, more than 200 inmates escaped from a prison in Benin City, according to reports in several media. In December, 38 prisoners escaped from another detention center in Enugu State.

While insecurity is one of the main problems undermining the stability of Africa's most populous country, this new episode should once again fuel criticism of the government of Muhammadu Buhari, whose record on security is rather disappointing.

According to the authorities in Imo State, the situation is under control and residents can “go about their businesses." In neighboring Abia State, a curfew was set from 10 p.m. to 6 a.m. following the attack.