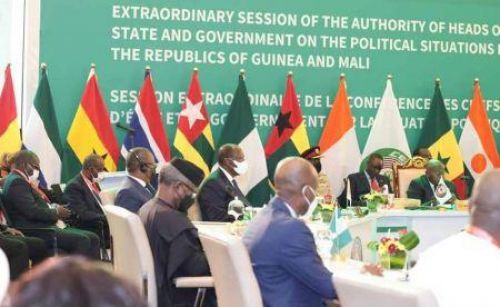 (Ecofin Agency) - ECOWAS heads of state met yesterday November 7 to discuss the "lack of progress in the preparation of elections" in Mali. The officials announced they will tighten sanctions against the transitional authorities.

As part of these sanctions, the transition members and their families are banned from traveling within the ECOWAS. Also, their financial assets as well as those of other transition institutions are frozen. The measure comes after the Malian government officially admitted its "inability" to meet the transition deadline of February 2022. Deploring "the lack of progress in the preparation of the elections and the absence of a detailed schedule," the heads of state of the sub-region called for a rapid return to constitutional order.

However, the transition government says it needs more time to comply. While some support the ECOWAS decision, many Malians raised their voices against it. They believe that the new authorities indeed need more time to get the country back on track and create an environment conducive to free, transparent, and democratic elections. Despite these differences of opinion, ECOWAS reiterates the "need to respect the transitional timetable for the elections scheduled for February 27, 2022," and calls on the authorities to work towards this goal.

The situation in Mali is particularly complex, with a growing security emergency. While visiting the country in late October, the UN Special Envoy El-Ghassim Wane said “the reality is that the security situation has deteriorated and the crisis is deepening.” He however noted that there is still room for maneuver.

During their meeting, ECOWAS Heads of State also took decisions regarding Guinea, which is also in the midst of a transition period. Taking into account the adoption of a Transitional Charter, the appointment of a civilian Prime Minister and the formation of the Transitional Government, they called on the new authorities to "rapidly submit a detailed timetable of activities to be undertaken within the framework of the transition, to ensure the holding of elections.” A special envoy to Guinea was also appointed, in the person of Mohamed Ibn Chambas, while the sanctions against the country remain until "the restoration of constitutional order.”