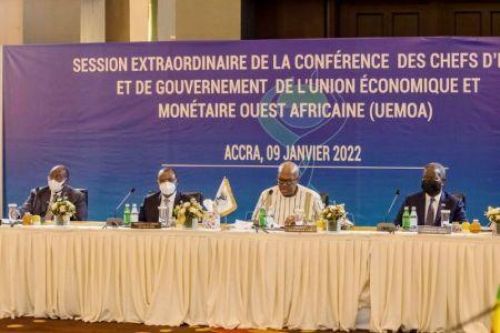 Gathered in Accra yesterday, the West African leaders announced, with immediate effect, the freezing of Malian state assets within the regional central bank and all the community’s commercial banks. ECOWAS will close both air and land borders to Mali and suspend financial aid to the country. Moreover, trade between Mali and the rest of the region will be strictly limited to necessities, oil and medical products, and electricity. All ECOWAS envoys to Bamako will be recalled.

Although the regional institution seems stuck to its guns, it has made it clear that the sanctions could be "gradually" lifted provided that "an acceptable and agreed timetable" is put in place and is duly respected.

In response, the Malian leaders condemned these "illegal and illegitimate" sanctions and deplored the lack of solidarity from WAEMU and ECOWAS. They also denounced the manipulation of regional institutions by foreign powers and promised to fight back. “As reciprocity, Mali has also decided to recall its ambassadors in ECOWAS and to close its land and air borders with the states concerned,” a government spokesman revealed in a broadcasted statement.