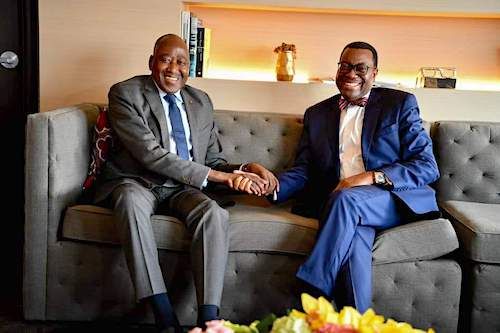 (AFRICAN DEVELOPMENT BANK) - July 8 was all like every normal day, focused on work. I had no inkling there would be a storm, even though we have weathered many storms and floods in Abidjan in recent times. Like a jolting bolt of thunder, everything changed when my wife, Grace, called my attention to a news item that the Prime Minister Amadou Gon Coulibaly had died. I told her this couldn’t be true as he just came back and as far as I knew he was fine.

I quickly went to look at the news. I had not seen any official confirmation. I made frantic calls. Alas! Amadou Gon had died indeed. What a tragedy! This was a storm with massive lightening like no other. I couldn’t control my sadness. This man who had served his nation so loyally and with such dignity has passed on, while at work.

My thoughts went to his dear wife and family who have been thrown into sorrow, suddenly. My mind went to President Alassane Ouattara, to whom he was a beloved son, a loyal partner and confidant for some 30 years. My mind went to the government of Côte d’Ivoire, and the nation where I lived for 5 years in the 1990s and now for another 5 years so far as President of the African Development Bank. A beautiful nation whom Amadou Gon served dutifully, diligently, passionately and faithfully until his last breath.

Amadou Gon was an exemplary leader. He was my friend. I remember calling him while in Paris. I was concerned about him and although we had exchanged messages, I still was not satisfied. I wanted to hear his voice. We spoke. I was very happy he was well.

Amadou Gon deserved to be well. He was such a great champion of programs to accelerate the development of his country. He carried the vision of the President and the government wholeheartedly into every meeting, into every discussion. We met very often, and every time I was always amazed at how this very humble and serious minded public servant always put the development of his country first.

He worked very closely with the African Development Bank. He visited the Bank several times and took great interest in all matters that affect the Bank. He worked so hard with the Bank and several development partners to bring life to the social development policy of the government.

A humble man. A selfless man. A faithful man. A shining light. We met and spoke together on several forums around the world: on the plane, at airports, in high level forums and summits. My impression of him was the same: calm; wise; insightful. A man of few words, whose every word was always well honed for impact. He spoke always from his heart. An he had a heart of gold.

My dear brother, Amadou Gon, thank you for your friendship. I was looking forward to us meeting again, in our usual warm brotherly embrace, to chat on your favorite topic: development of Côte d’Ivoire. But Alas! That is no longer to be. I guard emotions and memories of your life - your great life; and dedication and contributions to your nation. Thank you Prime Minister Amadou Gon Coulibaly. Thank you my dear friend and brother, Amadou Gon. Rest well. You will be sorely missed.