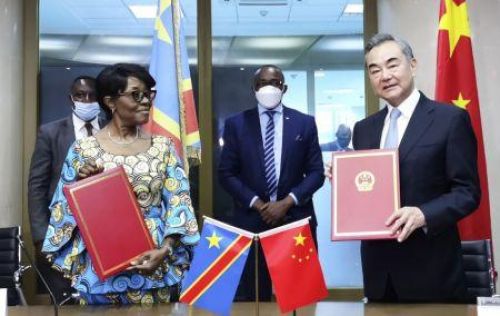 (Ecofin Agency) - The Democratic Republic of Congo became the 45th African country to join the Silk Road Initiative. An MoU was initialed in that regard last week between the Chinese foreign minister, Wang Yi, and his Congolese counterpart, Marie Tumba Nzeza, when the Chinese envoy visited the African country.

As a reminder, this initiative, which is valued at several trillion dollars, aims to link China to Europe via Africa. The deal with DR Congo will “strengthen bilateral economic cooperation between the two partners, bring a stronger dynamic to their mutually beneficial exchange, and open new prospects for their relations," the Chinese minister said.

This new move comes at a time when the government of Felix Tshisekedi is trying to strengthen its collaboration with its international partners, to obtain the necessary assistance to revive the economy. To achieve this goal, the Congolese authorities have obtained the cancellation of $28 million of their debt to the Middle Kingdom, in addition to a support of $2 million to the mandate of Tshisekedi to the presidency of the African Union.

The new agreement could also serve as a trigger for additional Chinese investments in the Central African country, whose large mineral reserves should play an important role in the Silk Road project.

The implementation of the new Silk Road has been accompanied by a wave of financing for African countries in recent years. Between 2000 and 2015, China granted no less than $94.4 billion in loans to countries on the continent.