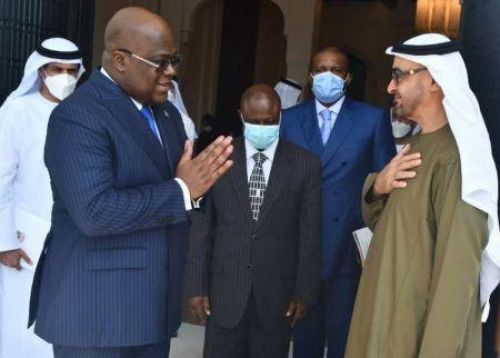 (Ecofin Agency) - On a visit to Abu Dhabi, the capital of the United Arab Emirates, President Felix Tshisekedi is holding a series of meetings with Emirati partners to attract more investment to the DRC. Targeted sectors include energy, mining, infrastructure, and security.

DR Congo's President, Felix Tshisekedi, has secured an investment of $1 billion in addition to 30 tactical armored military vehicles from the United Arab Emirates. The announcement was made by Mohamed Ben Zayed Al-Nahyane, Crown Prince of Abu Dhabi and Supreme Vice Commander of the UAE Armed Forces, following a meeting with the Congolese leader yesterday October 10.

The two officials discussed collaboration and investment opportunities in various areas, including infrastructure, energy, health, mining, and security. According to the Congolese presidency, "both parties agreed to strengthen their relations and create a win-win partnership. The Emirates have shown a strong willingness to help the DRC fight terrorism in the east.” The Congolese government is still struggling to bring peace back to that part of the country, despite the assistance of Monusco.

Since Felix Tshisekedi came to power, Kinshasa has made strong commitments to address the security crisis, while accelerating its development projects. For several months, the provinces of Ituri and North Kivu have been under siege, to put an end to the activities of armed groups. This initiative was followed by a strengthening of cooperation with the country's partners, including the U.S., to improve the capacities of the Congolese armed forces.