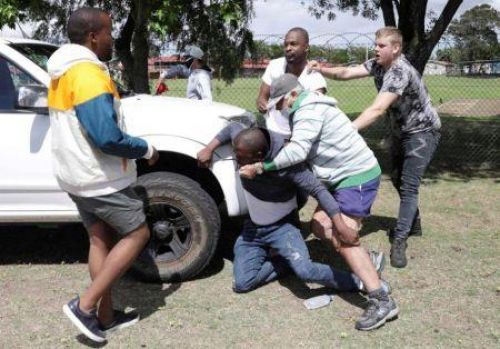 (Ecofin Agency) - South Africa was the scene of clashes between two groups of black and white individuals in Cape Town on November 9. The battle erupted following a new episode of racism at a school in the region.

Initial reports indicated that the protagonists were white parents of students and members of the leftist opposition party, Economic Freedom Fighters. The latter were protesting outside Brackenfell High School after allegations that only white students had been allowed to attend a graduation ceremony at the school a few days ago.

Videos posted on social media show white adults assaulting black demonstrators and insulting them, telling them to go away. This event reminds us of the dark side of the Rainbow Nation's history. The systemic apartheid imposed under the white rule for decades had gradually turned into a blatant inequality between whites and blacks.

In a statement released on November 10, President Cyril Ramaphosa condemned the clashes and recalled the right of all to demonstrate freely.

"Every South African has the right to demonstrate peacefully, and any action aimed at suppressing the right to freedom of expression, including through violence and intimidation, must be strongly condemned," he said while calling for an investigation into the allegations against Brackenfell High School.