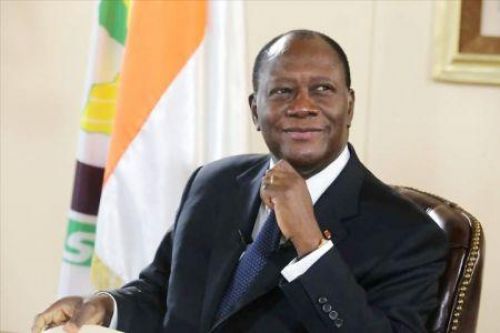 (Ecofin Agency) - Ivorian President Alassane Ouattara (photo) was the guest of a virtual debate organized on the occasion of the 60th anniversary of the Africa Department of the International Monetary Fund (IMF) last May 10. During his speech, the former official of the Bretton Woods institution made a strong plea for an in-depth reform, and an improvement of the measures taken to help African countries get out of the Covid-19 crisis.

According to the Ivorian head of state, African countries need the necessary fiscal space to finance their economic recovery processes. In this regard, he asked the IMF to be flexible regarding the rate of public deficit required of African states wishing to benefit from financing from the institution.

"The deficit-to-GDP ratio is 9% in the USA and nearly 8% in France. Germany, which has always been a surplus country, will this year record a deficit of 6%. However, in the context of our trade, African countries are required to be at 4%. This is impossible," he said.

"If the IMF continues to be rigid on deficit issues for poor countries during this period of pandemic, I'm sorry Ms. Georgieva, but you will have problems with all countries. We cannot accept that France, for example, has a deficit of 8% and that Côte d'Ivoire is forced to have a deficit of 4%. It is not sustainable.”

Although discussions for a large-scale issuance of IMF Special Drawing Rights (SDRs) to African countries seem to meet with the approval of several rich countries, the leader said that these measures alone will not solve the problem of African economies. According to President Ouattara, greater fiscal space for the continent's countries will allow them to address the enormous needs created by the Covid-19 pandemic, in an already tough context.

In sub-Saharan Africa alone, the IMF estimates the amount needed to fight the pandemic and terrorism while maintaining adequate reserves and accelerating economic recovery at about $425 billion over the next five years. This need will not be met by African countries' domestic revenue mobilization efforts alone.

Alassane Ouattara asked the IMF to create a framework for better mutual assistance between developed and least developed countries. "The G7 and G20 countries must show solidarity. I think they are selfish," he said. "There is a lack of solidarity from most of these countries. Such attitude is the root of some of the problems that these countries are experiencing today, such as migration," he added, calling on the richest to help the poorest.

Beyond the solidarity between rich and poor, the leader pleaded for an in-depth reform of the IMF, which he called to adapt to the times. "As a head of state and a politician, I believe that there is a structural problem. It concerns the organization of the world after the Second World War. In my opinion there are deep structural problems that have not been solved. I believe that this institution is simply outdated," said the former IMF Africa Director.

Specifically, he wants a better representation of Africa, including sub-Saharan Africa, which he believes is being harmed in the decision-making process of the IMF. "We cannot accept that Africa, which represents 54 countries, has only 7% of the quotas [...]. This must change because it is unfair and obsolete," he said, while also calling for an update of the Washington Consensus, the set of principles that guide the economic recovery measures of the Bretton Woods institutions.