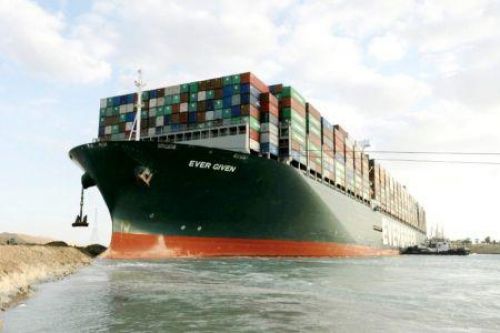 (Ecofin Agency) - Between the covid-19 pandemic and the Ever Given accident, the global economic environment was not conducive to increased revenues for the Suez Canal. However, the waterway generated a historic annual revenue in 2020-21.

According to him, between 2019-20 and 2020-21, the waterway has seen an increase in revenue of about $124.3 million. "The Suez Canal's revenues, despite various challenges, have seen a significant boost recently, with shipping statistics in the fiscal year 2020/2021 recording the highest annual revenue in the canal's history amounting to $5.84 billion compared to $5.72 billion in the fiscal year 2019/2020," Rabie said in his statement. This reflects a strong performance, given the challenging economic environment marked by the covid-19 pandemic and blockage of the waterway by Ever Given.

Indeed, On March 23, the container ship got stuck in the Canal, blocking traffic in this seaway which handles 10% of global trade. During the six days the incident lasted, the world economy was strongly impacted with a rise in oil prices, while according to the SCA, Egypt recorded between $12 million and $15 million in daily losses, not counting the funds mobilized to free the ship. Following the incident, the container ship was seized and legal proceedings were launched to determine the conditions of compensation for the damage suffered, before it was finally released on July 7, after the signing of a confidential compensation agreement.

Osama Rabie says the revenue of this maritime route increased the most during the first half of 2021. "The canal's revenue in the first half of 2021 amounted to about $3 billion compared to $2.76 billion in this period last year," he said, attributing the $237 million increase to the flexible marketing and pricing policies put in place by the authorities after the covid-19-induced slowdown.

For the next few years, Cairo seems to be banking on a continued upward trend in the canal's revenue trend, thanks in part to planned modernization and expansion work. By the end of the year, Rabie said he expects "performance rates ... to be at an all-time high, in terms of the number of ships transiting, tonnage, and revenue generated.”