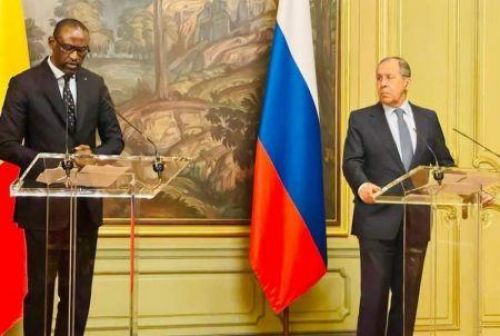 (Ecofin Agency) - Russian Foreign Minister Sergey Lavrov reiterated his country’s commitment to supporting the ongoing effort of Malian authorities to restore peace on their territory. This was during a joint press conference held yesterday in Moscow between him and his Malian counterpart Abdoulaye Diop.

“We agreed to strengthen the political dialog, which is proceeding very positively. My counterpart has spoken to me about the implementation of the Algiers agreement and about the preparation for the general elections in the context that we have in Mali on the ground. The active efforts of the terrorist groups especially in the northern part of the country did not help the government in preparing for those elections. And as minister Diop has told me, the specific date for these elections is going to be announced before the end of the year," the Russian official said. "We realize the importance of strengthening the anti-terrorist potential of Mali. That’s why we have been providing relevant armaments and various other goods to prevent any threat to the sovereignty and independence of Mali,” he added.

Mali is currently pressured by the international community to hold elections as initially planned (in February 2022). However, Bamako says the conditions on the ground do not allow to follow through on that commitment. This decision earned it sanctions from ECOWAS, which called on the international community to do the same until constitutional order is restored in the country.

"We hoped that the Malians could agree on a roadmap within the framework of a dialog to complete this transition with transparent and credible elections. We are expecting our partners from ECOWAS, the AU, and the United Nations to show more understanding. The sanctions imposed on our country at the last ECOWAS summit do not help us move forward. They can only worsen an already complex situation," commented Minister Abdoulaye Diop.

While Mali is getting closer to Russia, its relations with France is crumbling

Speaking about the recent developments in the relations between France and Mali, the Russian Foreign Minister deplored the withdrawal of the French army from "areas that are increasingly under the control of terrorists”. This, he said, makes the security situation in the country even worse. Russia "will continue its support to Malian forces by providing them with equipment, and by training senior officers through our Ministry of Defense,” Sergey said, denying any involvement of the Russian government in possible negotiations between the Malian authorities and "private security companies”.

For his part, Minister Diop emphasized Mali's gratitude for the security actions carried out by France up to now. While voices are raised against increased cooperation between Mali and Russia, Abdoulaye Diop said no one can impose who Mali will partner with.  "The relationship between Russia and Mali is one of state to state. And Mali will not allow any state or institution to tell it who it can deal with," he said. This statement echoes the concerns of several European leaders regarding the Russian-Malian rapprochement.

Moreover, Moscow wishes to extend its cooperation with Bamako beyond the security sector, in line with the resolutions taken at the Africa-Russia summit in Sochi in 2019. According to the two ministers, new Russian investments are expected in Mali in energy, agricultural technology, soil exploration, and telecoms. Another meeting is planned between the two men in the nearest future in Mali. “Minister Diop invited me to visit Mali in the nearest future and of course I am glad to accept this invitation. We will agree on the details later,” Sergey Lavrov said.